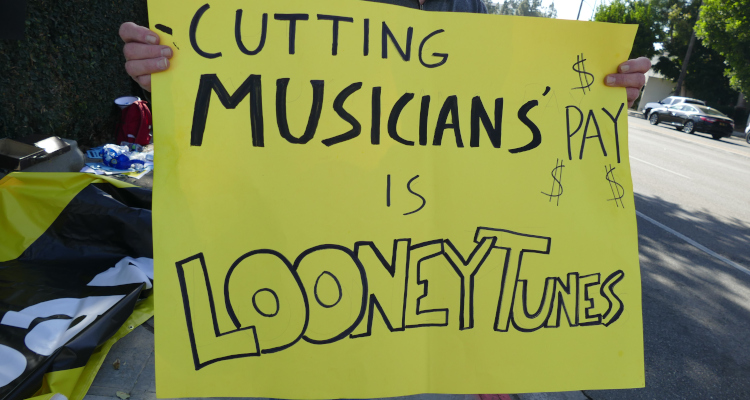 On October 30, Los Angeles musicians held a protest and an impromptu performance under the water tower of Warner Bros. Studios in Burbank, as they continue to attempt to receive fair pay for streamed content.

The musicians were protesting the launch of a new streaming service called HBO Max from WarnerMedia. It is part of their long-running #BandTogether campaign, which is trying to bring residual payments to musicians in new media in line with other workers, such as actors, writers and singers.  The American Federation of Musicians (AFM) members insist that, when studios stream their work, they effectively receive a 75% pay cut.

So far, the major film and television studios, as they move more and more films and television shows to streaming platforms, are refusing to meet the musicians’ demands. This includes:

Martin McClellan, who is a pianist, orchestrator and music copyist, says, “Musicians make immeasurable contributions to motion picture and television projects, and our work on new media projects should be no different than the traditional media we work on.”

Donald Foster, who is a clarinetist, adds, “It is time to raise wages and offer a residual compensation for new media in line with the other creative teams in the movie and television making process.”

Damien Chazelle, who is the director of La La Land, says, “I support the AFM musicians in their fight for residuals from new media projects. Los Angeles is lucky to have the best musicians in the world, and that is due to their ability to make a real living playing music here for movies and shows — which is in turn due in large part to residuals. The dedicated and passionate instrumentalists who perform a movie or show’s score contribute just as much as the choir and vocalists who join them — and who are fairly compensated under the SAG-AFTRA deal.”

Here is video of the protests: