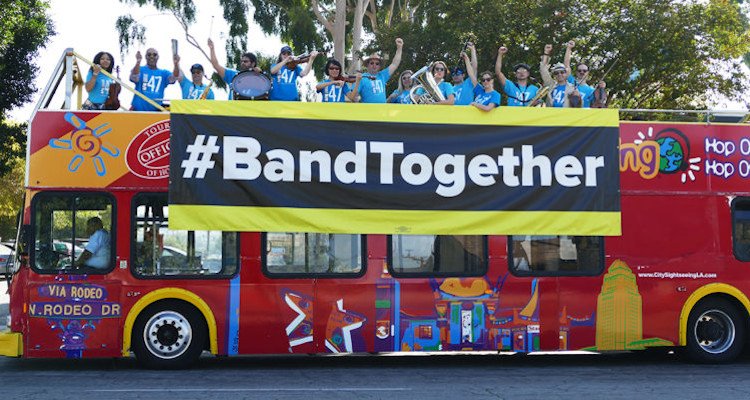 In their continuing struggle to receive fair residuals from film and television work that gets streamed, musicians representing the American Federation of Musicians (AFM) held a rally outside of Disney’s Burbank studios during the launch of the company’s Disney+ service.

Under the banner of #BandTogether, the musicians are also seeking set wages and screen credits.

As they have done at a number of their recent rallies, the musicians — which numbered over 50 — performed a live concert during the rally. At this particular event, they did so from a double-decker bus. Also attending the rally were colleagues from other entertainment guilds, such as SAG-AFTRA and the Animation Guild.

The musicians fear that the current industry trend in film and television toward streaming, such as Disney+, will “decimate” their livelihoods if their demands are not met.

Just a few weeks ago, these same musicians rallied in front of Warner Bros. Studios during the launch of HBO Max.

They have also visited studio executives at their homes, held impromptu concerts outside industry events and even picketed book signings of Disney CEO Bob Iger. These actions have occurred in both Los Angeles and New York.

Allison Allport, who is a harpist, said at the Disney+ rally that “musicians spend their lives investing time, money, skill and passion into their art. When musicians contribute their hard work, dedication and artistry to a show, they not only enrich the emotional lives of millions of people, but generate real profits for producers. Musicians must be fairly compensated for these contributions.”

So far, none of the studios, including Disney, have shown any indication that they are willing to meet the musicians’ demands. So, rallies like the one in Burbank are likely to continue.

While Disney+ launched on November 12, it is said to already have more than 10 million subscribers.