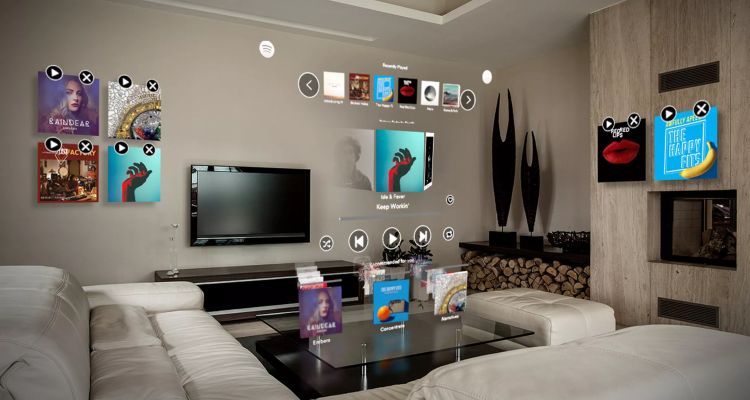 The app requires a Spotify Premium subscription to use. The Magic Leap One mixed reality headset shipped to founders last year ⁠— starting at $2,295.

The headset is primarily aimed at artists and app developers and looks like something out of a sci-fi movie. The Magic Leap One features built-in speakers situated near the ears.  There’s also a jack for headphones for private listening.

Spotify is the first major music streaming service to launch an app for the Magic Leap headset.

The Spotify app for Magic Leap takes advantage of the recently launched Background Music Service. Users can continue listening to their music on Spotify while using other Magic Leap One apps on their device.

The app is spatially aware, allowing users to pin recently played artists, albums, or tracks to locations in their homes. The content builds over time, allowing users to collect and curate their playlists on a per-room basis. It also gives users the ability to create soundscapes for each room in their house.

Magic Leap hopes the launch of this app is just the first step in expanding spatial computing. Soon the technology could extend to podcasts, audiobooks, and other storytelling mediums.

The mixed reality start-up previously raised $2.6 billion in funding back in April. The company is seeking more funding as it continues to flesh out its mixed reality headset. Magic Leap has been quiet about its platform this year, but the launch of the Spotify app is a big step forward.

Just recently, attendees at the Siggraph Computer Animation Festival got to experience the story of Frankenstein through the eyes of a young Mary Shelley. They also announced a partnership with the Royal Shakespeare Company to build new theatrical experiences using spatial computing technology.