Coldplay Will Stop Touring Until Concerts Are ‘Environmentally Beneficial’

Coldplay frontman Chris Martin says the band is halting its touring plans. The group wants to lead the way to environmentally sustainable concerts.

Coldplay’s new album, Everyday Life releases tomorrow. The band will play two gigs in Jordan that will be broadcast worldwide on YouTube.

The first concert will take place in Amman on Friday ⁠— at sunrise and sunset, mirroring the two sides of the new album. The band last traveled the world for their ‘A Head Full of Dreams Tour’ ⁠— 122 shows spread across five continents in 2016 and 2017.

Martin says the band will take the next few years to figure out how to deliver sustainable touring.

“We’re taking time over the next year or two, to work out how our tour can not only be sustainable [but] how can it be actively beneficial.  We would be disappointed if it’s not carbon neutral.  The hardest thing is the flying side of things.

“Our dream is to have a show with no single-use plastic, to have it largely solar-powered. We’ve done a lot of big tours at this point. How do we turn it around, so it’s no so much taking as giving?”

Coldplay chose Jordan because the band wanted to pick somewhere in the middle of the world. “Where we normally don’t get to play,” Martin said.

The group will perform a one-off concert for fans in London at the Natural History Museum on November 25. Proceeds from that event will be donated to an environmental charity.

It’s impossible to calculate the environmental impact of one touring band accurately. The music industry’s best guess for live music in the UK is 405,000 tonnes of greenhouse gas emissions every year. 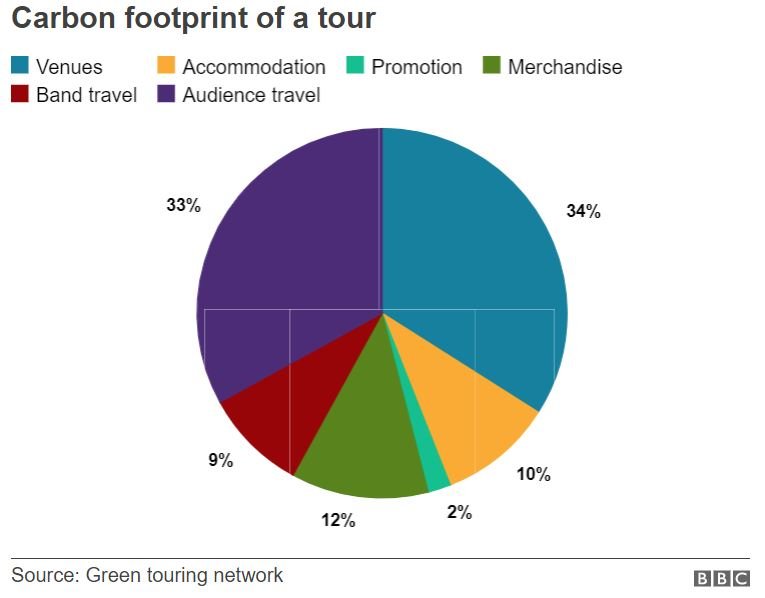 Audience travel to the venue and the venue itself make up 67% of the carbon footprint of a tour. That doesn’t account for the crew, trucks, buses, and accommodations for the band and crew.

Coldplay is making a huge statement here ⁠— their ‘A Head Full of Dreams Tour’ made $523 million. I’m sure the industry will be watching closely as the world continues to focus on climate change.