Reeperbahn Festival Gets $22 Million in Funding from the German Government 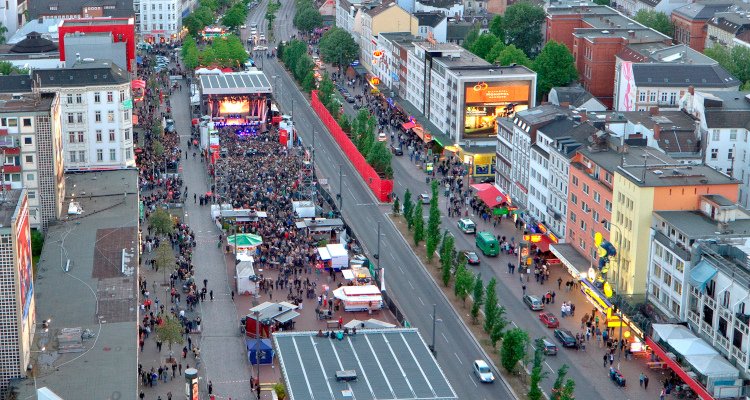 Location of Reeperbahn Festival by Frank Nocke (CC BY 3.0)

The German federal parliament has awarded the Reeperbahn Festival in Hamburg with €20 million ($22 million) in funding to help the festival grow both at home and abroad during the next five years.

The Reeperbahn Festival is both a performance event that actively seeks new talent from across the world and an international music marketplace. The latest edition of the event took place this past September, and it included emerging international music artists as well as spoken-word artists.

All together, around 40,000 people attended this year’s 900 events (including 600 concerts), which took place at 90 different venues. During its four days, the event also attracted media from 23 countries, and nearly 5,000 music professionals from 56 countries attended the conference that coincided with the festival.

Prior to the additional funding, the festival had an annual budget of somewhere between €5-6 million ($5.5-6.6 million), which was already heavily subsidized by the German government. Both the Federal Government Commissioner for Culture and the Ministry of Foreign Affairs made significant contributions to the festival in 2019.

Alexander Schulz, who is the managing director of the festival, says that some of the new funding will be used to commission a study of gender equality, which is part of the gender-balance project that it is developing called Keychange, and other educational programs associated with the event.

Schulz also says that the festival hopes to expand to other countries in the future.

Among the possibilities, Reeperbahn hopes to stage editions of the festival in the following locations:

That will, of course, demand a lot of capital over the next few years.  But Schulz indicated that the event’s growing success attracted the federal capital.

The Reeperbahn Festival began in 2006.  The event builds on the frenetic energy of Hamburg’s Reeperbahn, a strip notorious for its booming culture, raucous nightlife, and anything-goes mentality.