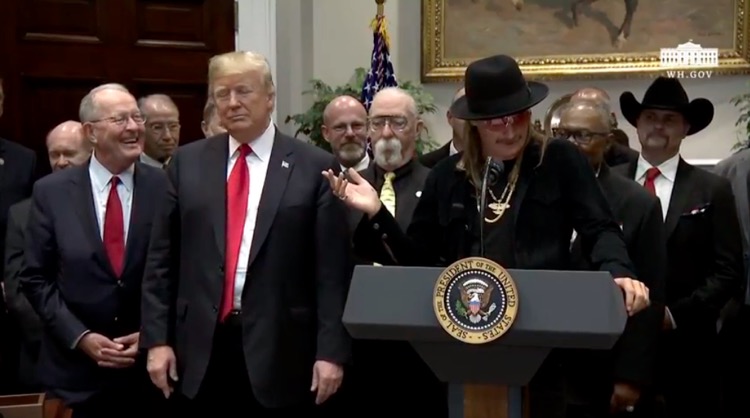 Kid Rock alongside Donald Trump during the signing of the Music Modernization Act, 2018 (photo: White House)

Outspoken artist Kid Rock is closing his restaurant in Detroit in response to a protest against the controversial statements that he made about Oprah Winfrey and others.

Rock announced on Facebook that he was closing Kid Rock’s Made in Detroit restaurant outside Little Caesar’s Arena when the lease expires in April.

The kerfuffle began a week earlier when Rock drunkenly and incoherently ranted about Winfrey, Joy Behar, and Kathie Lee Gifford while on stage of a bar that he owns in Nashville. The rant got so bad that a police officer had to physically remove him from his own stage.

Even after Rock sobered, he refused to apologize, explaining that he was upset with Winfrey because of a booking issue with her show. “I am just saying what a lot of people think,” he said at the time.

All this led the Michigan chapter of the National Action Network (NAN), which was founded by civil rights leader Al Sharpton, to plan a protest outside Rock’s restaurant.

The protest apparently offended Rock so much that he decided to close the restaurant.

“I appreciate all who have patronized our place and still have much love for the City of Detroit and the people / organizations that I have helped there for years, black, white, whatever, but learned long ago, go where you’re celebrated, not tolerated,” he wrote. “I guess the millions of dollars I pumped into that town was not enough. I will let the NAN and others go ahead and take the wheel now. Good luck.”

Rock went on to say “I may be guilty of being a loud mouth jerk at times, but trying to label me racist is a joke, and actually only does a disservice to the black community, which I have supported my entire life, by trying to alienate myself and many others.”