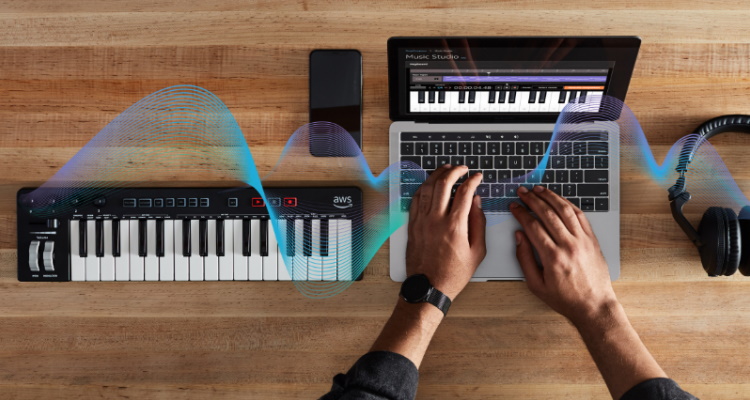 Amazon DeepComposer is a new AI-powered keyboard announced at AWS re:Invent. The 32-key, 2-octave board uses machine learning to generate music from what you play.

“Developers, regardless of their background in ML or music, can get started with Generative Adversarial Networks (GANs). This Generative AI technique pits two different neural networks against each other to produce new and original digital works based on sample inputs. With AWS DeepComposer, you can train and optimize GAN models to create original music.”

Amazon says developers can train their own machine learning models or use the ones they supply. Music created using the model can be tweaked and shared on SoundCloud.

Amazon is highly committed to machine learning ⁠— DeepComposer is the third such device. The company released the DeepLens camera in 2017 for machine learning photography edits. The DeepRacer racing cars were introduced last year.

It’s worth noting that the DeepComposer isn’t available yet, but it will cost $99 when it launches.

Anyone interested in the keyboard can sign up for a preview when it becomes available. Amazon claims that it held the first hybrid AI human pop acoustic collaboration to announce the device. However, that distinction probably goes to Taryn Southern. She partnered with Amper Music to use AI to help create her latest album.

AI-driven machine learning is going to become more prevalent in the future. Google’s DeepMind AI has been hard at work smashing Chess and Go champions around the world. Pretty soon, the latest music earworm may not even be human-generated if technology like this catches on.

You can learn more about Amazon DeepComposer at the launch site. More information will probably be available closer to launch.