Chance the Rapper Cancels His U.S. Arena Tour Amidst Rumors of Sluggish Sales 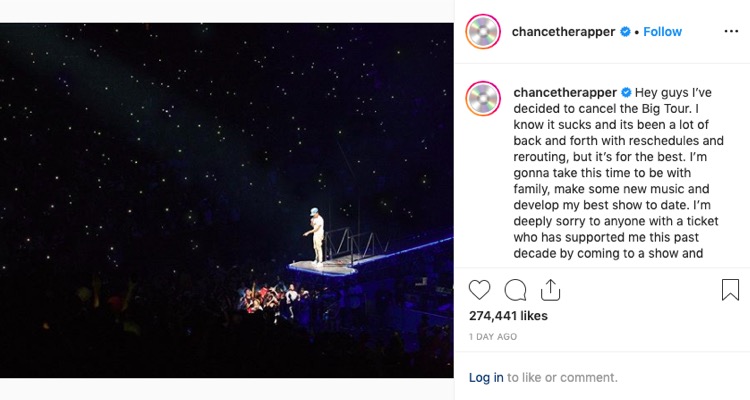 Chance the Rapper officially cancels his ‘Big Tour’ on Instagram

After a number of last-minute postponements, Chance the Rapper has flat-out canceled his ‘Big Tour’.

Chance the Rapper has officially canceled his ambitious, 35-date ‘Big Tour,’ a move that follows a string of frustrating postponements.  This time, the rapper cited a need to spend time with this young family, which now includes a newborn daughter.

“Hey guys, I’ve decided to cancel the Big Tour,” Chance posted on his official Instagram account over the weekend. “I know it sucks and it’s been a lot of back and forth with reschedules and rerouting, but it’s for the best. I’m gonna take this time to be with family, make some new music and develop my best show to date.”

The move follows an abrupt postponement of various dates in September, which realigned the tour to start in January.

That rescheduling happened just five dates before the opening performance. The 35-city arena tour, announced in July, included some serious venues, including Madison Square Garden and The Forum. Lil Yachty and Taylor Bennett were opening acts.

By October, Chance’s team was offering 2-for-1 specials to fill venues.  On December 2nd, Chance offered the 2-for-1 on Cyber Monday, with limited purchase windows designed to stimulate demand. 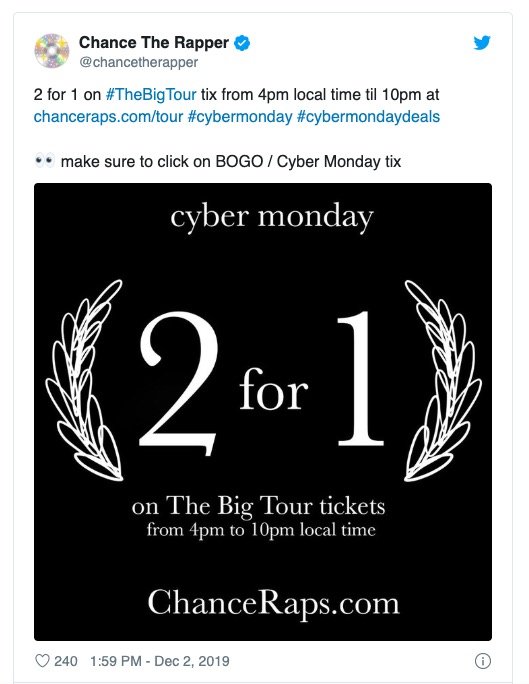 Back in October, Chance also hosted Saturday Night Live — again — though that appearance may have failed to move the needle.

Meanwhile, sales and interest around Chance the Rapper’s album, Big Day, dropped relatively quickly after a summertime release. That happened despite a star-studded cast of guest artists, including Gucci Mane, Megan Thee Stallion, and Shawn Mendes. Earlier, Chance’s Coloring Book was a mainstay atop the charts and various streaming platforms for years before cooling down.

The flat-out cancellation of a massive, US-based tour is considered an extreme move within the live concert industry.  For fans, especially those that have already purchased tickets, cancellations and postponements are frustrating inconveniences.  Venues are oftentimes left scrambling to fill the open dates, and could be less likely to book the artist in the future.

“I’m deeply sorry to anyone with a ticket who has supported me this past decade by coming to a show and rocking out with me and I feel even worse for anyone who was planning on making this their first Chance concert,” the rapper continued.  “Thank you all for an amazing year, and a huge thanks to my team and family for being so strong through this whole year.”