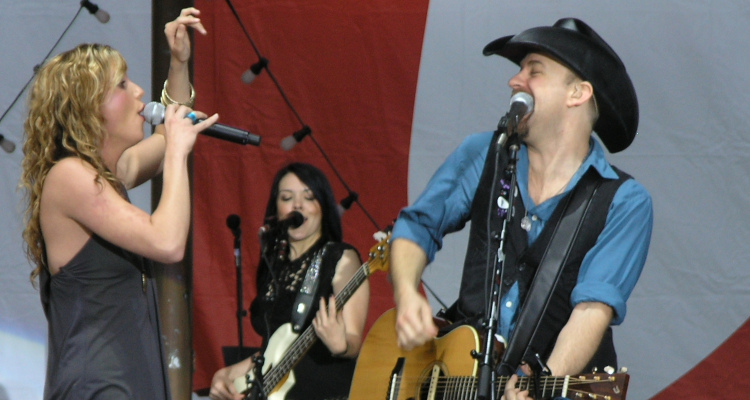 All the controversy relating to Taylor Swift and Big Machine Records have not stopped the record label from signing the country music duo Sugarland.

This is not the first partnership between Big Machine and Sugarland, which consists of Jennifer Nettles and Kristian Bush. Last year, the singers teamed up with Big Machine and Universal Music Nashville for the release of Bigger. But now Big Machine will become Sugarland’s exclusive record label.

Scott Borchetta, who is the CEO and president of Big Machine and who allegedly received death threats after he refused to allow Taylor Swift to perform her old songs at the American Music Awards, issued a statement along with the announcement.

He said, “The music that Jennifer and Kristian make and perform together is nothing short of magical and I’m honored that they now call Big Machine Records their exclusive home.”

Jennifer Nettles also released a statement in conjunction with the announcement.

She said, “I am so proud to continue my association with Scott Borchetta and Big Machine Records. Scott has been there for Sugarland since our very first release, ‘Baby Girl,’ and continues to be our biggest champion when it comes to our records. We are so excited about all that’s ahead!”

In addition to Sugarland, both Nettles and Bush have pursued other projects of late. Interestingly, especially in light of Big Machine’s recent controversies, Nettles’ latest single — which is entitled “I Can Do Hard Things” — reportedly touches upon the themes of female empowerment.

As for Bush, he recently formed a new band called Dark Water, which includes his brother Brandon Bush and Benji Shanks. Last month, the trio released a song called “Paint It Blue,” and they are expected to release more music in the near future.

As for Sugarland, the duo have said that their next album will likely come out sometime in 2020.