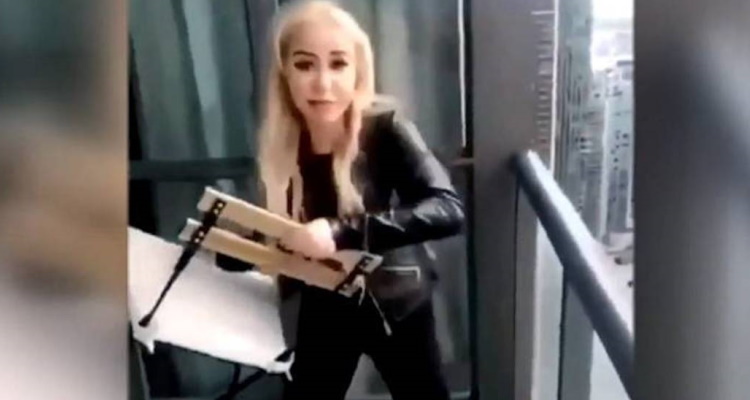 Marcella Zoia, Toronto’s infamous Chair Girl, made a cameo appearance in Drake’s latest video. Fan reaction to the appearance quickly led to her removal, though.

The video contained a brief appearance of 20-year-old Zoia, who threw patio furniture from a Toronto balcony in February. The video went viral after Zoia endangered the lives of the people below her with her stunt.

A warrant for Zoia’s arrest was issued after the video went viral. She surrendered to police and was released on bail after pleading guilty to mischief causing danger to life. Zoia is facing six months in jail and will be sentenced in January 2020.

Before she was removed, Chair Girl could be seen dancing momentarily with other partygoers. Her Instagram account even featured some behind-the-scenes videos of the shoot. However, those posts have since been removed.

It’s not clear if she chose to remove them or if someone affiliated with Drake asked her to remove them. Video director Theo Skudra posted an update on the situation to his Instagram. “Certain people we don’t condone,” the post says. Drake tweeted to let fans know “I don’t choose extras for my videos by the way,” followed with a chair emoji.

Drake shared the song and called it a freestyle from the ‘El Kuumba tape.’ That mix is a collaboration between several members of Drake’s OVO Sound label. You can listen to that mix in its entirety on SoundCloud or check out the video for “War” on YouTube.