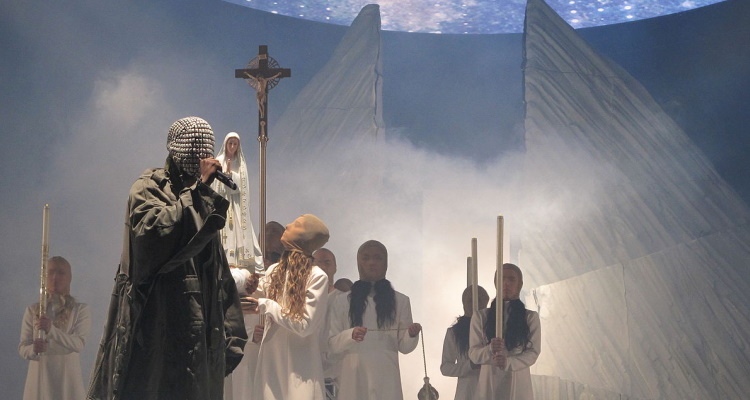 Kanye West celebrated the new year with a Sunday Service at a homeless shelter. The Skid Row appearance drew criticism for remarks he made about the T.I. virginity checks controversy.

West started the service at the Union Rescue Mission on Skid Row with good intentions. He said Sunday Service saved him when he started it over a year ago. He talked about the homeless crisis currently affecting Los Angeles and the rest of the country.

West’s rants about actual issues quickly turned sour as he started in on other topics.

“I ain’t tellin’ nobody what to do; I’m expressin’ what I’ve been through. ‘Cause you know people love to take a soundbite and say, ‘This was not exactly devil-approved by the internet,” West rants in the clip from TMZ.

“They tryna play T.I., but he’s talkin’ about somethin’ that’s God-approved,” West says. That statement was met with silence from those in attendance.

The highly controversial comments surrounding forced ‘virginity checks’ for his daughter landed T.I. in hot water. The rapper was publicly condemned after saying he wanted to make sure her hymen was still intact. An intact hymen is not an accurate test of virginity, which T.I. acknowledged doctors explained to him at the time.

When the comments rose to a fever pitch, T.I. sat down for a ‘Red Table Talk’ with Jada Pinkett Smith. Calling the whole controversy, ‘Hymengate’ T.I. says his point of view was misconstrued. He was never present, and the virginity checks aren’t something she is subjected to as an adult.

The hosts informed T.I. that his actions seemed controlling, but the rapper stuck to his guns. He said he was doing it out of a place of ‘love and protection’ for his daughter. T.I. later says his daughter was only upset with him for revealing their family business so publicly.

That still sounds overly controlling and New York State thought so, too. The controversy prompted legislation to outlaw the practice.