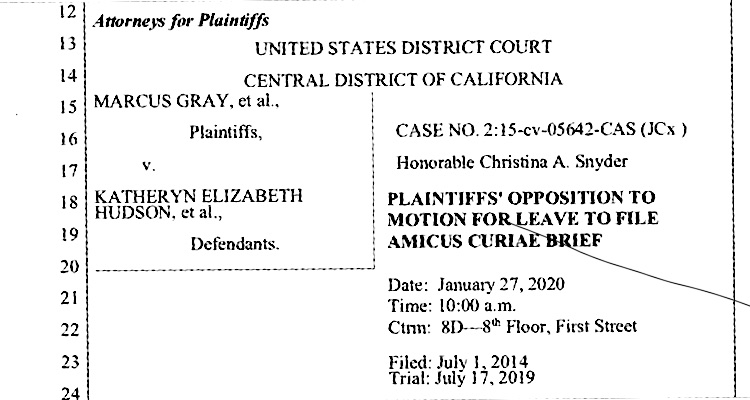 Attorneys for Katy Perry are recruiting expert musicologists to reverse a shocking, $2.8 million copyright infringement verdict against the pop singer. Those musicologists are now being attacked as biased towards Perry and her collaborators.

Updated: Attorney Kenneth Freundlich, who represents the group of musicologists, has told Digital Music News that the group was not recruited by Katy Perry’s legal team.  Instead, it came together organically.   “The group self-formed by word of mouth amongst the musicology community,” Freundlich told us.  The musicologists’ amici brief has now been accepted by the U.S. District Court; more on that development and the group here.

Katy Perry’s uphill battle against a massive, $2.8 million copyright infringement penalty from last year continued this week. In the wake of the unanimous jury decision in favor of rapper Flame, issued in August of 2019, Perry’s attorneys at Greenberg Traurig and Mitchell Silberberg & Knupp have moved to retry the case as a matter of law, or spark an entirely new trial.

Accordingly, this jury has been accused of relying heavily on ‘intrinsic’ elements in determining whether infringement had occurred. In response, Perry’s lawyers recruited 15 different expert musicologists to better analyze the ‘extrinsic’ similarities between the two songs, and determine if “Dark Horse” really stole the musical elements as alleged. The gaggle of musicologists filed an amicus brief to rectify the erroneous result.

In their filing, the group of ‘amici musicologists’ noted that they “have a strong interest in juries correctly applying jury instructions to enable them, where appropriate, to find no ‘extrinsic similarity’ between works, and in Courts correcting obvious jury error when juries fail to correctly apply them to the evidence.”

Sounds like a grave error occurred, though attorneys for Flame (whose real name is Marcus Gray) beg to differ.

In a strongly worded counter-filing issued this week, Flame’s legal team — led by Michael Kahn — argued that these ‘experts’ were actually puppets for Perry, Capitol Records, and other various big-name producers.

“Moreover, their brief relies, in part, upon inadmissible evidence outside the record in this case, which is both highly prejudicial to Plaintiffs and improperly considered under the legal standards for post-trial motions.”

Accordingly, Kahn is seeking an outright dismissal of the musicologists’ brief, both for reasons of bias and redundancy.

“The proposed Amicus brief contains a single argument, namely the contention that ‘the alleged similarities between the ostinatos in question are not of original expression,'” Flame’s legal team blasted.

“That issue has been exhaustively briefed by Defendants with extensive citations to the trial testimony of expert musicologists. Because the [musicologists’] proposed brief adds nothing new or useful to the analysis, the Court should deny leave to file.”