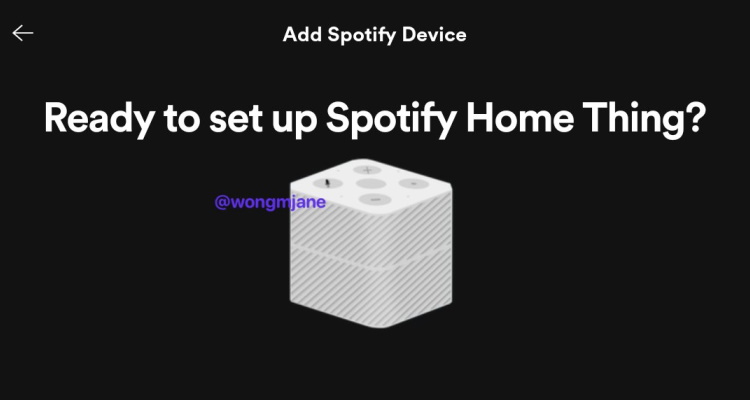 Spotify released its first hardware product in May of 2019, dubbed the Car Thing. Spotify started testing the Car Thing device in the United States, and the blog post announcing the test said not to be ‘too surprised’ if more hardware devices show up in the future.

“We might do similar voice-specific tests in the future, so don’t be surprised if you hear about ‘Voice Thing’ and ‘Home Thing,'” the blog post reads. Now, Home Thing may not be too far off, according to a leaked image posted on Twitter.

Jane Manchun Wong tweeted the image, saying she found it in Spotify’s mobile app. The screen features a white cube-shaped device that does not resemble the Car Thing at all.

Wong says she can’t determine whether Home Thing is currently being tested or not.

The image surfaced in the most recent Spotify mobile app update, so a 2020 launch seems likely. Perhaps it will be a limited test similar to Car Thing before it receives a broader rollout. Spotify is hoping to broaden its footprint into physical devices to solidify its audience and diversify its revenue sources.

But the streaming music company is facing stiff competition in the smart speaker category. A recent report commissioned by NPR found that the category grew 24% in 2019. 21% of Americans over 18 own at least one smart speaker – or around 53 million Americans. The total number of smart devices in homes has increased by 78% year-over-year.

Amazon dominates the category with its bevy of Alexa devices. Overall, the smart speaker install base is expected to jump to over 200 million by the end of 2020. In the future, we may see Spotify Home Thing giveaways instead of Google Home Mini for Spotify subscribers.