Spotify Joins the Influencer Train With Their Own Version of ‘Stories’ 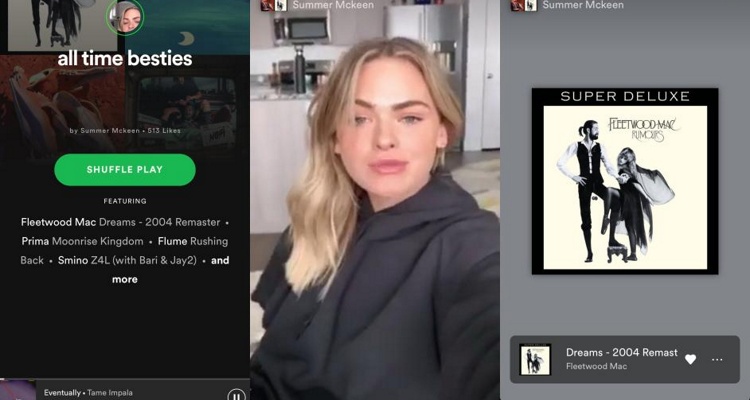 Spotify appears to be testing a new Stories feature, similar to Facebook, Instagram, and Snapchat. Influencers will be able to share a short-form video with their public playlists.

The new feature will allow social media influencers to share a short video along with playlists. An animated circle above the playlist title invites users to click to see the content. Once Spotify Stories are open, clips play and advance automatically. Users can tap an X at the top of the app to exit it at any time.

Spotify Stories also appear to be a way to incorporate short-form videos (like TikTok) into the platform. TikTok’s new music streaming service Resso is right around the corner. Allowing influencers to create videos for their playlists is one way Spotify is mimicking TikTok.

Only select influencers can use the Spotify Stories feature. Spotify says it will roll out the feature to others shortly. Follower count and engaging followers are determining factors in who gets access to Spotify Stories for now.

Mckeen often shares the playlists she makes with her fans, making her a prime pick to test the new feature. For now, Spotify says it is not giving artists access to the functionality.

The tool is meant to be used as a music discovery feature, not a promotional one. Artists can use Spotify’s new Canvas feature to create looping videos for album art, instead.

Mimicking Stories from other social media helps Spotify become more than just a music-listening platform. That’s crucial for Spotify to keep growing since tech giants like Google, Apple, and Amazon have their competing music services.

Those competing services have all signed deals with the same labels, making music streaming services seem homogenous. That’s one reason Spotify has invested so much into exclusive podcasts and content.