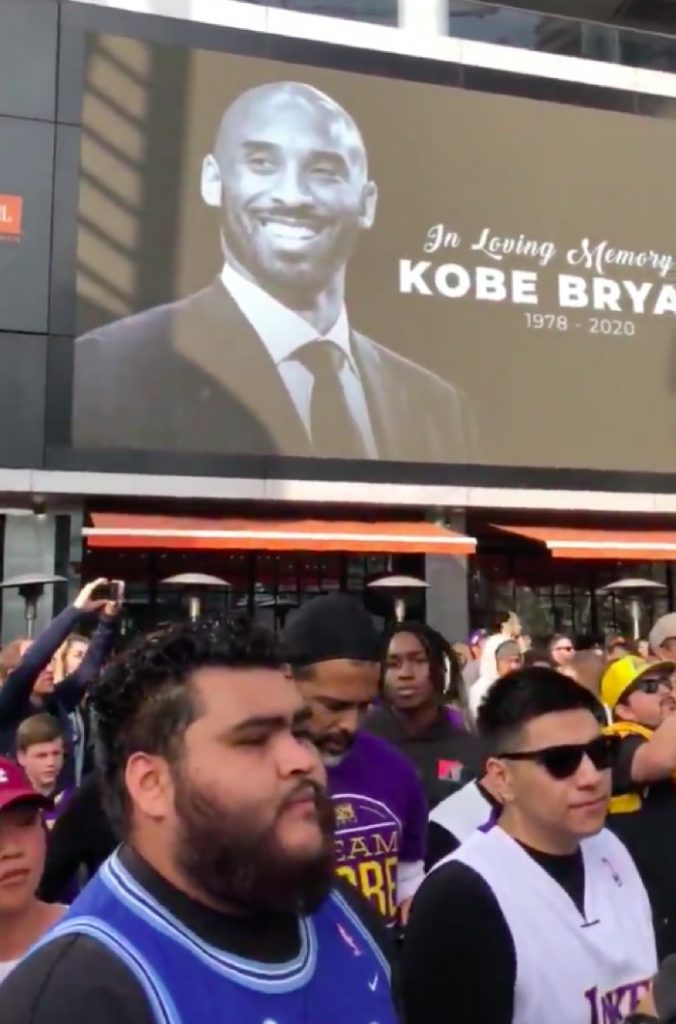 Thousands of fans mourn the death of Kobe Bryant outside Staples Center in Los Angeles, just as the 62nd Annual Grammy Awards get started.

The shocking and unexpected death of Kobe Bryant Sunday morning created a major crowd-control problem outside the Staples Center, where the Grammys red carpet and event was held.

At first, the shocking news was dismissed as unbelievable. But NBA superstar Kobe Bryant died in a helicopter crash on Sunday, January 26th, at the age of 41. In response, shocked fans in Los Angeles swarmed the Staples Center, where Bryant led the Lakers to numerous championship seasons over his storied 20-year career.

Of course, Bryant’s death was completely unexpected and deeply depressing to basketball fans, Americans, and the broader world. But the issue was doubly shocking for the Grammys, which was scheduled on the exact same day as Kobe’s death — at the exact same venue that Bryant called home for two decades.

By mid-afternoon, makeshift memorials featuring flowers, basketballs, Lakers memorabilia, and posters were crowding the Staples Center’s main entrance along Figueroa Street. An ad-hoc gathering of thousands of fans were chanting, praying, crying, and embracing one another, a situation that made the Grammys red carpet seem trivial by comparison.

Kobe fans, obviously distressed by the news, reported being forced away by security officials so that the Grammys could get underway.

And make no mistake: to Los Angelenos, and especially Lakers fans, the Staples Center is Kobe’s house. The Grammys are just visiting.

“It’s the location,” one fan tweeted. “The Grammys are at Kobe’s HOME the Staples Center which he basically MADE. Mourners are being turned away due to red carpet/post-show activities. It’s a mess over there. That’s why people are saying cancel.”

Another fan expressed similar disdain towards the Grammys event in light of Kobe’s passing.  “The Grammys should be canceled. Where is the respect? I am boycotting the Grammys.”

“The Grammys need to be postponed for a week,” another fan complained.

Indeed, the situation could result in yet another black mark for the troubled Grammys.

Heading into the awards ceremony, the Recording Academy was dealing with an extremely contentious battle over its leadership, with CEO Deborah Dugan fired just ten days before the event.  Dugan slammed back with sexual harassment complaints, accusing her predecessor, Neil Portnow, of abusing his power and raping a foreign artist.

That chaos undoubtedly made the event logistics more complicated, though a battle with Kobe Bryant fans has multiplied the mess. Harvey Mason, Jr., the interim CEO, was shoved into the lead role just days before showtime.

Bryant and his 13-year-old daughter, Gianna Maria Onore, who also perished in the accident, were traveling to Mamba Academy in Thousand Oaks, California, when the helicopter’s engine caught fire and gave out.

The helicopter crashed in Calabasas, and emergency personnel responded but were unable to provide medical assistance. Three others (not Bryant’s wife, it was confirmed) were riding with Bryant and his daughter.

In 2011, Bryant appeared in Jay Chou’s “The Heaven and Earth Challenge,” with proceeds from the track being used to purchase basketball equipment for impoverished schools.

As far as the Grammys event itself, Lizzo opened the event with a Kobe Bryant nod. Others also recognized the basketball great in tributes throughout the awards show.