Juice WRLD Wasn’t Even Mentioned at the 2020 Grammy Awards 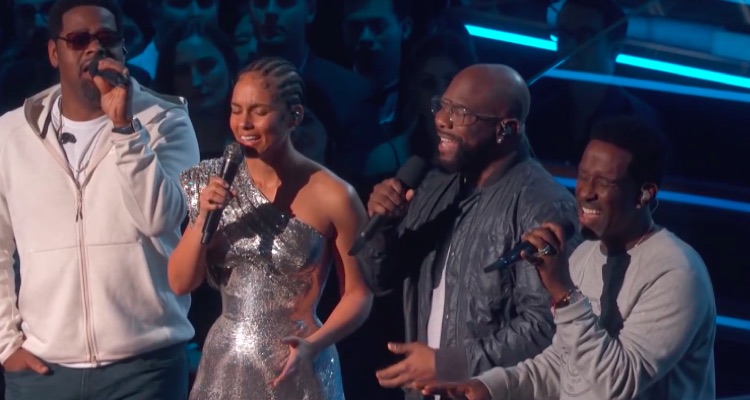 Alicia Keys and Boyz II Men sing a tribute to the late Kobe Bryant at the 62nd Grammy Awards.

Juice WRLD was almost entirely ignored the Grammy Awards on Sunday night, partly due to the shocking death of Kobe Bryant. But the rapper wasn’t nominated for any awards, despite a stellar 2019.

Despite his immense contribution to the world of music in 2019, rapper Juice WRLD wasn’t even mentioned during Sunday night’s 62nd Grammy Awards telecast.  Juice WRLD, aka Jarad Higgins, died from an overdose of oxycodone and codeine on the early morning of December 8th, 2019, on the tarmac of Chicago’s Midway Airport.

Of course, Juice WRLD’s December death was heavily overshadowed by Kobe Bryant, who died just hours before the Grammys started. Bryant and eight other individuals died on Sunday morning when their Sikorsky S-76 helicopter crashed into a Calabasas mountainside in heavy fog.

Even without the Kobe situation, it’s unclear if Juice WRLD was originally slated to receive any remembrances at the Grammys. But Higgins wasn’t even nominated for Best New Artist or any other categories, despite having a strong 2019 and a string of chart-topping songs and other accolades.

Prior to his death, Juice WRLD also performed with numerous high-profile artists, including Halsey and BTS.

Actually, there was one brief mention of Juice WRLD at the end, during the Grammy’s ‘In Memoriam’ segment.

But that probably added insult to injury: the quick slide for Juice WRLD accidentally included an image of a female singer, likely due to a last-minute editing error.  The sloppy ‘In Memoriam’ segment also misspelled the name of Cars frontman and guitarist Ric Ocasek, who died last year.

Just hours after news of Bryant’s death spread, mourning fans swarmed to the Staples Center. The downtown Los Angeles arena is where Bryant played twenty years with the Los Angeles Lakers, with five NBA championships earned. The Staples Center is widely regarded as Kobe’s house, and a makeshift vigil and memorial soon created a crowd-control problem for the Grammys and its pre-game red carpet ceremony.