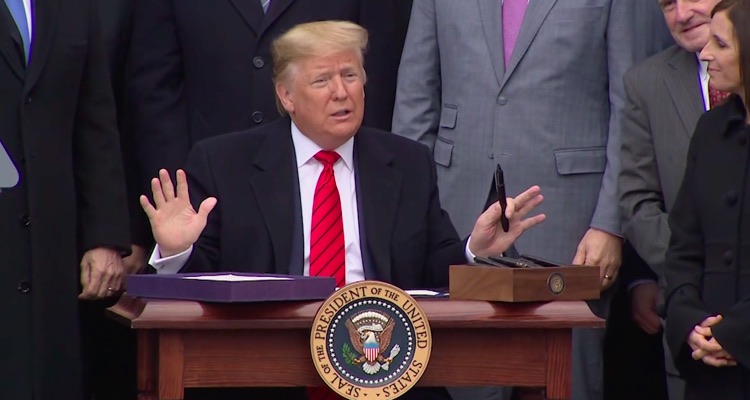 President Trump has signed USMCA, a trade agreement between the United States, Canada, and Mexico, into law. The far-reaching NAFTA replacement includes a multitude of provisions pertaining not only to physical imports and exports, but to many facets of copyright law.

The most prominent of these copyright provisions—and one that’s been decried by creators and companies in the music industry—is a reaffirmed and extended “safe harbor” for internet service providers (ISPs) and digital platforms that enable users to upload (potentially copyrighted) content.

The protection, which is essentially the opposite of the European Union’s much-debated Copyright Directive, doesn’t hold companies liable for individuals’ copyright infringements so long as they (the companies) quickly respond to removal requests from rightsholders. In order to enjoy continued protection, ISPs and content platforms must ban users who repeatedly upload works they don’t own — though enforcement on that point can be tricky.

This DMCA-style copyright-safeguard system will be applied throughout Canada and Mexico.

Additionally, these nations are in the process of adopting other elements of U.S. copyright policy. That includes extended copyright life (Canada’s copyright spans 50 years after the creator’s passing, but will soon match the U.S.’s 70 years) and an affirmation of artists’ rights to negotiate country-wide streaming deals.

Though many creator-advocate groups have come out against USMCA because of its copyright language, the deal received overwhelming (and ever-rare) bipartisan support in Congress. On December 19th, 2019, 385 Representatives (193 Democrats and 192 Republicans) voted in favor of the law, which was passed in the Senate on January 16th, by a tally of 89 to 10 (including 51 Republicans and 38 Democrats).

Mexican senators approved USMCA on December 12th, 2019, with 107 members voting in favor and just one member voting against the agreement. Canada’s legislature is in the process of negotiating and approving the deal, which will go into effect once Prime Minister Justin Trudeau signs off.