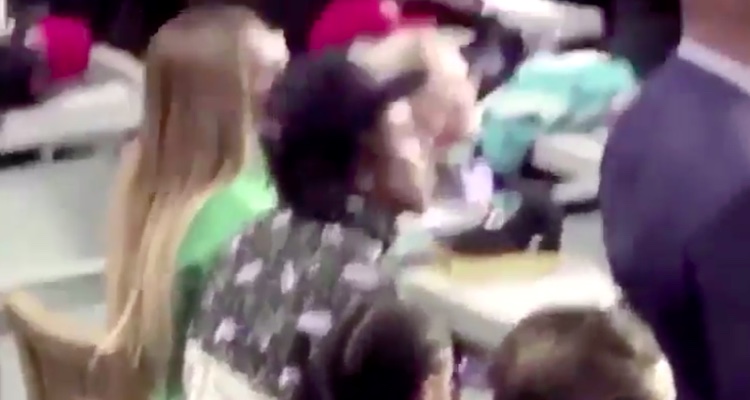 The clip first appeared on Twitter. Though its quality isn’t great, it clearly shows Jay-Z and Beyoncé—as well as several others, including their daughter—sitting during the rendition. Jay-Z also left his cap in place.

The move follows Jay-Z’s controversial alliance with the NFL. The rapper has found himself in something of a precarious spot as the NFL’s ‘Live Music Entertainment Strategist,’ though he’s repeatedly defended the move.

Jay-Z criticized the NFL and supported Colin Kaepernick before accepting the position in August 2019, but was then targeted by Kaepernick and others with accusations of selling out. As part of his announcement with the NFL, Jay-Z said it was “time to move past kneeling” during the national anthem.

Jay-Z has subsequently toed the line between protester and employee, and his remaining seated during Demi Lovato’s Super Bowl LIV performance — but still appearing at the game — is the latest in a series of attempts to balance an executive position with concerns of injustice.

Beyoncé and Jay-Z have been married since 2008. Last month, the two boycotted the 62nd Annual Grammy Awards amid accusations of corruption and sexual harassment from former Recording Academy CEO Deborah Dugan. The couple did attend Clive Davis’s annual pre-Grammy gala, where they gave Diddy a standing ovation after he called out the Recording Academy, saying, “black music has never been respected by the Grammys.”

Jay-Z appears to be focusing on non-music endeavors, especially his NFL position. Beyoncé turned in a busy 2019, which included the release of Homecoming, a Netflix documentary about her 2018 Coachella performance; Beyoncé wrote and directed the 137-minute work. She also lent her voice to The Lion King, which became the highest-grossing animated film of all time.

At the time of writing, Jay-Z and Beyoncé hadn’t publicly commented on their decision to remain seated.