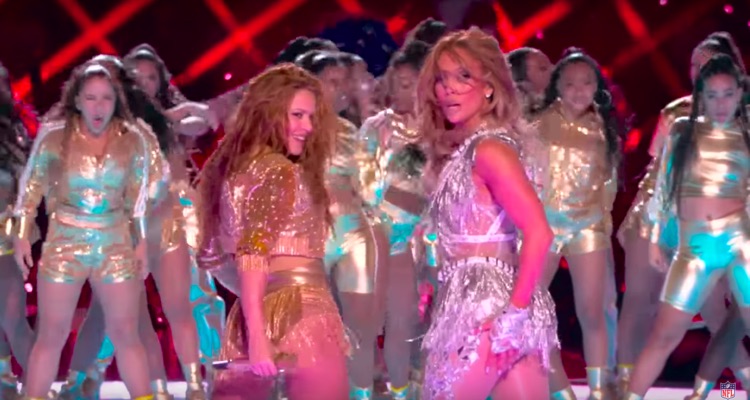 The NFL has a longstanding tradition of not paying its Superbowl Halftime performers — J.Lo and Shakira were no exception.

It’s the biggest stage on the planet, and it doesn’t pay sh—t.

According to multiple reports and sources this week, the NFL has refused to alter its longstanding policy of not paying Super Bowl performers.  That includes the most recent show by Shakira and Jennifer Lopez, who dazzled an audience of more than 100 million last Sunday evening during their Super Bowl LIV Halftime Show.

The non-payment is hardly a secret.  Back in 2014, the NFL flatly admitted to not paying Halftime artists.  “We’re putting someone up there for twelve-and-a-half minutes in front of the largest audience that any television program garners in the United States,” NFL Director of Programming Lawrence Randall told Time back in 2014.

Still, the league has little problem attracting superstars like Maroon 5, Katie Perry, Coldplay, Shakira, and Jennifer Lopez. And those stars aren’t getting completely stiffed: earlier today, Forbes reported that Shakira and Jennifer Lopez may have performed at Super Bowl LIV in exchange for union-scale pay and the cost of production—a far cry from the sizable rates that they’re accustomed to fetching.

In theory, the digital sales and fan interest generated by Super Bowl Halftime performances are worth just as much — and probably more — for artists than the once-off payments that typically accompany other gigs.

Though J.Lo and Shakira earn roughly $2 million per tour stop, they can expect a tremendous windfall on the heels of their Super Bowl LIV Halftime Show, which was watched by a staggering 103 million people.

Other recently booked acts, including Justin Timberlake, Lady Gaga, and Katy Perry, have been compensated in the same fashion. Moreover, the popularity boost that follows halftime shows is so valuable that the NFL has reportedly considered charging artists to perform. However, this fee hasn’t yet been instituted, and it seems unlikely that it’ll become the norm anytime soon.

According to the cited Forbes piece, Justin Timberlake saw a “214% spike in Spotify streams” during the first hour following his 2018 halftime effort. Similarly, halftime acts’ StubHub search volume and concert revenue increase dramatically both immediately and in the long term.

Shakira, looking to capitalize on her post-performance buzz, recently announced that she’ll be embarking on a worldwide tour in 2021, though locations, venues, and dates, haven’t yet been revealed.

If the Colombia native’s per-concert earnings grow like Travis Scott’s (which doubled) or even Maroon 5’s (which experienced a $200,000 uptick), she could make many millions of dollars more than she otherwise would have. And while J.Lo hasn’t revealed a world tour, it’s probable that her standard fee for films—and the variety of roles she’s offered—will jump considerably.

At the time of writing, the NFL, J.Lo, and Shakira hadn’t yet commented.