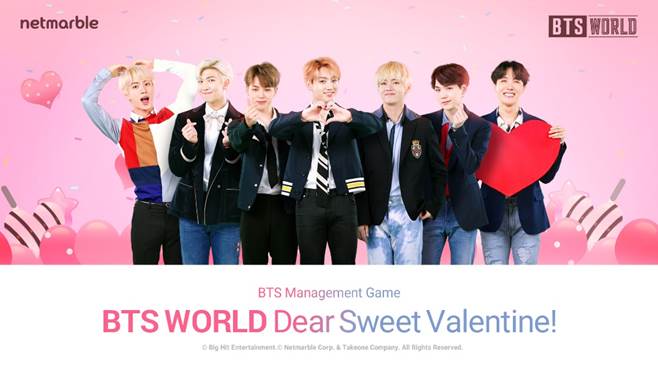 The popular BTS World app is getting a new Valentine’s Day update.

BTS World is a highly popular sim game about managing South Korea’s most popular boy band. Players take on the role of an executive at Big Hit and must guide BTS on their journey to stardom. To celebrate the upcoming holiday, BTS World features several new event stages.

There are a total of seven new 5-star cards to collect, including valentine’s Day stickers.

The app launched last year as a way for hardcore BTS fans to try their hand at managing the group. It also includes a behind-the-scenes look at photos and video clips. Players can interact with the band 1:1 through interactive content, making it highly successful among K-pop fans.

BTS fans are some of the most dedicated and rabid in the industry. Last year, we covered a study that reports BTS and K-pop, in general, are driving a resurgence in CD sales. In South Korea, CD and cassette sales have been rising since 2014. Physical media sales are topping 20 million each year in South Korea, primarily driven by the success of K-pop.

K-pop fans are more willing to collect multiple physical items from the bands. Special edition releases may have small changes that make each series collectible in its own right.

It helps that the artists and labels are always looking to make their vinyl releases special. There’s even some speculation that the broad availability of music streaming is helping the resurgence of vinyl. Fans use music streaming as a discovery format and invest big by buying the albums and collections they want to own.