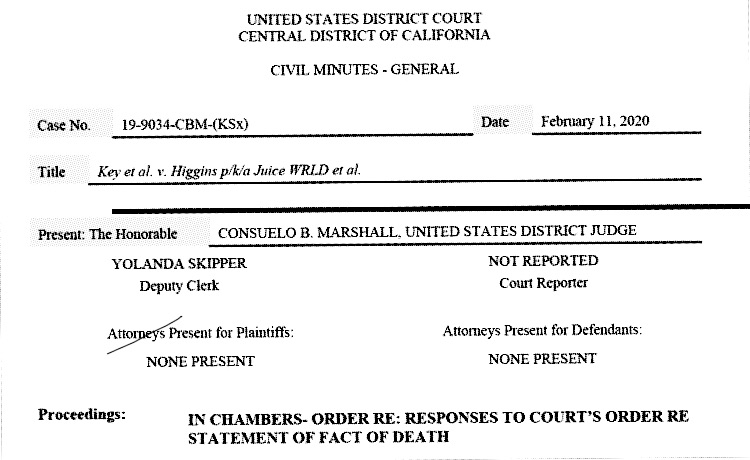 Surviving Juice WRLD family members are now being dragged into a massive, $15 million copyright infringement lawsuit filed by Yellowcard prior to the rapper’s death.

Juice WRLD suffered a tragic overdose on December 8th of last year while his private plane was raided by law enforcement agents.  Juice WRLD, aka Jarad Higgins, was declared dead within hours, but a lawsuit against him lives on.

Now, things are starting to get messy.  In the wake of Juice WRLD’s death, members of the band Yellowcard —William Ryan Key, Peter Michael Mosely, Longineu Warren Parsons, and Sean Michael Wellman-Mackin, as represented by industry attorney Richard Busch — decided to soldier onward with their complaint.  But suing a dead guy is proving to be a complicated task.

Back in October, Yellowcard filed the lawsuit against Juice WRLD over the song “Lucid Dreams,” which was one of Higgins’ biggest hits. Yellowcard claims that “Lucid Dreams” lifted their 2006 song, “Holly Wood Died,” though it’s unclear if Higgins was even aware of the track — the rapper would have been about seven years old at the time of the song’s release. Either way, Yellowcard is suing for damages that could reach an estimated $15 million.

Of course, Juice WRLD isn’t around to explain his influences for the song, though other defendants will undoubtedly be cross-examined.

That includes Grade A Productions, Taz Taylor, Nicholas Mira, BMG Rights Management, Kobalt Music Services, and Interscope Records, a group that filed a ‘Statement of Death’ with the U.S. District Court to remove Higgins’ name from the defendant list.

Now, it appears that Yellowcard, represented by Richard Busch, has pushed to keep Jarad Higgins as a defendant, albeit with a representative from his family. But who’s the heir? It’s unclear if Juice WRLD left a will, or who is managing his estate. Now, identifying that person (or persons) will be where this case shifts its focus.

In a court order signed Tuesday (February 11th) by U.S. District Court Judge Consuelo B. Marshall, the matter was kicked to a probate court to determine who should represent Higgins and defend against the suit.

Here’s the determination from the Court:

“On January 29th, 2020, Defendants filed a Statement of Fact of Death of defendant Jarad A. Higgins p/k/a ‘Juice WRLD.’ On January 31st, 2020, the parties were ordered to notify the Court whether ‘substitution of the proper party’ is necessary in light of the death of Defendant Higgins or whether the action shall proceed ‘only… against the remaining parties’.

“This action is STAYED pending the appointment of a representative for the estate of Defendant Higgins by the probate court.  The parties shall file a status report re: the probate proceedings no later than April 13, 2020.”

Exactly who will get plucked from the Higgins clan is unclear, though Higgins’ mother is a good guess. So far, nobody has responded and claimed ownership of the Juice WRLD empire.

Attorney Richard Busch has not responded to earlier requests for comment.