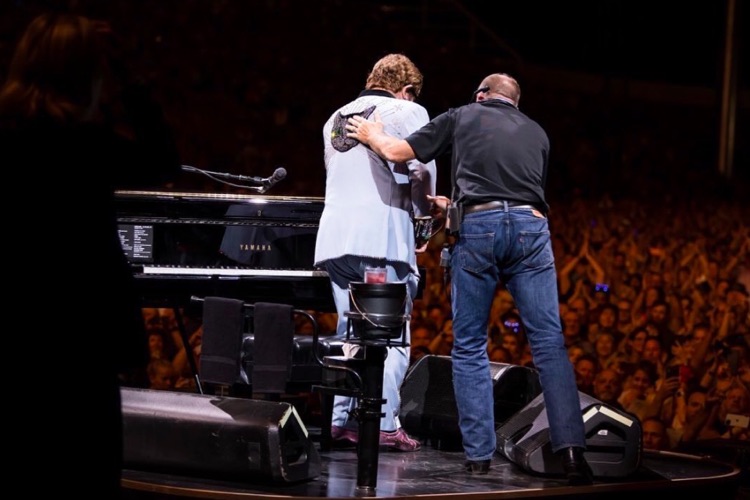 Owing to an ongoing illness, Elton John has been forced to postpone one of his scheduled Farewell Yellow Brick Road performances.

The 72-year-old valiantly attempted to push through a Sunday concert in Auckland, New Zealand, having been diagnosed with walking pneumonia earlier in the day; the infection is serious, but typically does not require extensive antibiotics and recovery, as pneumonia proper does. John completed more than half of the setlist before losing his voice and exiting the stage, to appreciative cheers from the crowd.

Medical professionals advised him to rest, and as a result, the next Auckland show has been pushed back one day, to February 19th. Subsequent performances are expected to proceed as planned, though this could change if John’s condition worsens and/or if he requires extra time to recuperate.

To say that Sir Elton John’s farewell effort has kept him busy would be an understatement. Presently comprised of more than 270 completed and announced concerts, the Yellow Brick Road Tour has already taken the beloved artist across America, Canada, Europe, and much of Oceania.

Nine performances remain on the current leg of the tour, after which John will head back to North America for an additional 43 gigs. Another European leg is scheduled to follow, and John will close the year with four consecutive performances in his native England. Details concerning 2021’s tour dates will be made available in the coming months.

Upon revealing the Yellow Brick Road Tour in 2018, Elton John indicated that his age made it much more difficult to travel, and that he wished to spend time with his two children. He and his partner, David Furnish, have been married for six years, since England legalized same-sex marriage.

John has long been one of the most active artists in music; he performed “The Million Dollar Piano,” a Las Vegas show, over 200 times before shifting gears to the once-off tour. Last week, he appeared at the Oscars to accept an award for “Best Original Song,” and apparently, he embarked on the 12-hour return flight to New Zealand shortly afterwards.