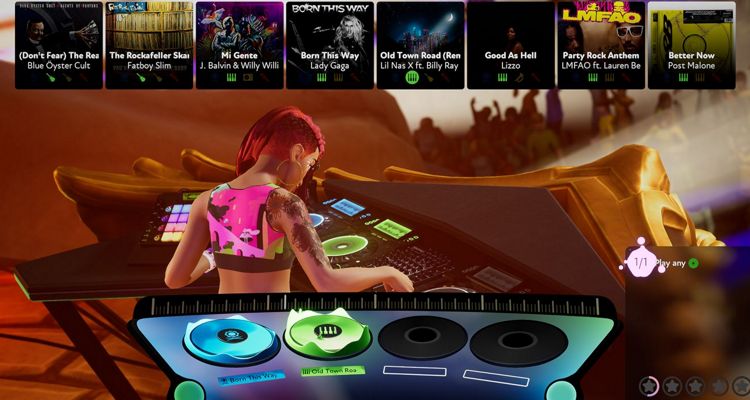 Harmonix, the development studio behind Rock Band, is back with a new DJ-focused music game called Fuser.

The developer describes Fuser as “a non-stop virtual music festival where you control the music.”

Players take on the role of DJ, mashing popular songs together for points to excite the crowd. The game will feature a single-player campaign, a freestyle mode, and a multiplayer mode to compete against other player DJs.

Music games live and die by their music selection – so what does Harmonix have in store for Fuser?

Harmonix says the game will include over 100 licensed tracks at launch. A selection of songs previewed in the recent trailer includes 50 Cent’s “In Da Club,” Billie Eilish’s “bad guy,” Smash Mouth’s “All Star,” and Lil Nas X’s “Old Town Road.”

Fuser will also feature a social aspect for sharing mashup creations online. I’m not sure how well that feature will work when content is shared to YouTube, though. Fortnite’s officially licensed rickroll emote caused some content creators to get copyright strikes against their account.

“It’s recording and sharing videos of you singing along to your favorite songs, watching your favorite bands play at festivals, and sharing hit music with your friends. Fuser puts players at the center of all that by letting you mix and share some of the biggest hits,” Janiak said in a statement.

This new music game isn’t the first time Harmonix has experimented with allowing players to DJ.

The studio previously released a game called Dropmix, where players could mix songs by playing cards. Fuser looks much more similar to Guitar Hero and Rock Band. Those games are intending to simulate playing a real guitar or drum set.

Fuser will launch this fall on the PC, PS4, Switch, and Xbox One.