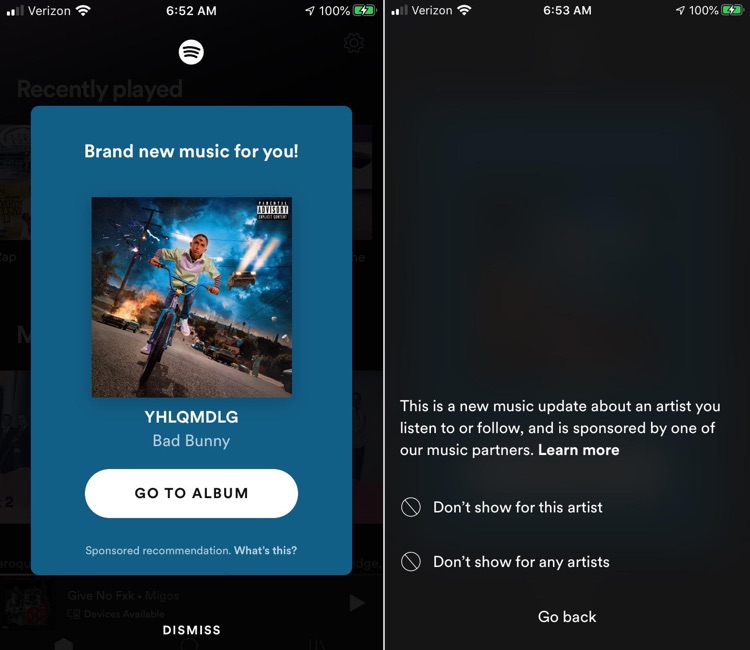 Popping up on a Spotify account near you (photo: Digital Music News).

Bad Bunny’s new album is killing it on Spotify — partially due to the platform’s paid advertising options.

Puerto Rican singer Bad Bunny is taking full advantage of Spotify’s soon-to-be expanded advertising tools to promote his newest album, YHLQMDLG, and the early results speak for themselves. Late yesterday, we reported that Spotify was ramping up its pay-for-promotional programs (or, ‘pay-for-play’ programs according to some folks).

YHLQMDLG, the 25-year-old’s third studio album, was released on February 29th. The artist, his record label, and/or his management group enrolled the 20-track work in Spotify’s Marquee program, which, for 55 cents per play and a $5,000 minimum payment, informs likely fans of new music releases.

At the time of this piece’s writing, “La Dificil,” “Ignorantes,” “Si Veo a Tu Mama,” “La Santa,” and “Vete” had secured positions on the upper third of Spotify’s Global Top 50 playlist.

YHLQMDLG’s stellar Spotify performance — and participation in Marquee — bode well for the music streaming platform’s intention to expand its advertising options. Though industry (and fan) responses to the decision have been mixed, the choice’s financial implications appear promising.

Moreover, artists like Bad Bunny are certainly reaping the rewards.

Bad Bunny’s next concert is scheduled to take place on April 30th, in Spain, and is followed by planned shows in Puerto Rico and Portugal, in addition to more Spain performances. It’s unclear if the artist’s touring plans will change in response to the ongoing coronavirus (COVID-19) epidemic, but this program could be sparking longer-term interest in attending live concerts.

In the latter portion of YHLQMDLG’s final song, “<3,” Bad Bunny (whose full name is Benito Antonio Martínez Ocasio) indicated that he will retire after releasing another album in about nine months. Despite his young age, Bad Bunny has maintained a rigorous schedule, and he’s been open about the mental health struggles he’s endured because of his fame and celebrity.

More details about Spotify’s bolstered advertising tools are expected to be revealed soon.