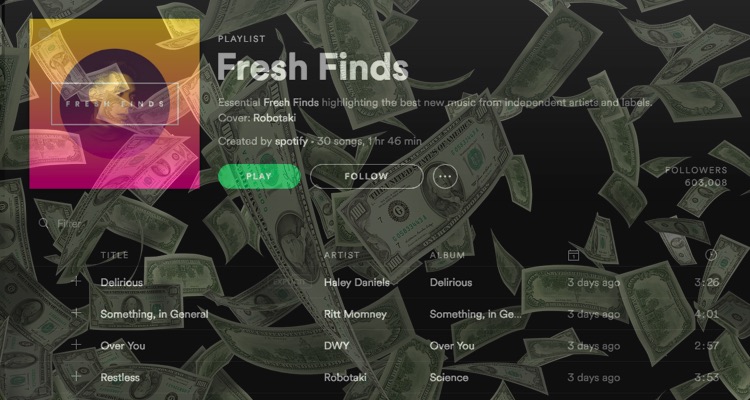 Following the success of ‘Marquee,’ Spotify has greenlit the expansion of its artist advertising program.  But ‘paying for promotion’ is getting dangerously closely to ‘paying for play’ for many.

Having experienced success with the U.S. trial of Marquee, a pay-per-click promotional tool that enables labels and artists to market new songs and albums to music streamers, Spotify is moving forward with its controversial paid-advertising program.

Marquee will eventually become available internationally, and a second promotional tool will be released as part of Spotify’s broader program; this tool is reportedly being developed and pitched, though a launch date and other details haven’t been publicly disclosed.

Plans for the expanded initiative were first tipped by Bloomberg.

At a current rate of 55 cents per play (undoubtedly, pricing is subject to change as Spotify’s paid-advertising program expands), Marquee-promoted artists will have their new songs and albums marketed to both free and paid Spotify users. Premium subscribers, however, can disable Marquee notifications.

According to Beck Kloss, Spotify’s vice president of market and strategy, the results of Marquee’s early rollout have been extremely encouraging.

High-profile artists like Justin Bieber and Lil Wayne are said to have utilized the service. About one-quarter of Spotify users who’ve seen Marquee notifications—simple messages indicating that an act has released a new song or album—have listened to the plugged works.

Spotify’s immense worldwide popularity, including approximately 124 million paid subscribers and 153 million free-version listeners, is without doubt. However, the streaming giant has had a difficult time turning a profit in more than a decade, chiefly because the majority of its income is returned to record labels as royalties.

To be sure, the Big Three record labels are entitled to a healthy share of Spotify’s total revenue—something the platform is presently negotiating to change. In coordination with contractual adjustments, paid advertising may enable the Stockholm-based company to dramatically enhance its earnings; Spotify execs are also said to be considering selling listening data to labels.

Even so, not everyone is convinced that Marquee and other paid-advertising options are positive.

Marquee requires advertisers to pay a minimum of $5,000—a price that many independent artists and labels will have a difficult time fronting. Additionally, an international launch will bring with it international demand and, as a result, heightened competition and inflated costs.

Suddenly, remaining relevant on Spotify is an expensive game.

Others yet argue that Spotify’s lackluster royalties are payment enough from artists and independent labels, and that to request supplemental compensation is plainly ridiculous. On that note, longtime Spotify critic Helienne Lindvall responded to the news by writing: “Songwriters have subsidized their [Spotify’s] lack of a proper business model for a decade…Now You Pay Us.”

In terms of royalty math, this is certainly tilting against the interests of artists and content owners.  Once promotional costs are factored into the equation, the effective royalty is suddenly lower.  Indeed, many artists could lose money on Spotify if promotional campaigns don’t pan out.

Additional details relating to Spotify’s paid-advertising expansion are expected to be made available in the near future.