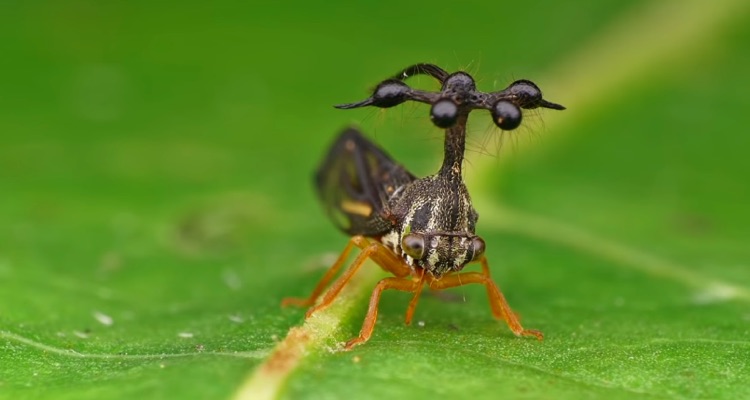 A graduate student at University of Illinois at Urbana-Champaign has named a newly discovered treehopper species after Lady Gaga.

Brendan Morris said he was inspired to base the treehopper’s name off Lady Gaga because the insect, like the artist, is highly unique. To be sure, treehoppers feature horns, intricate skin textures, variable color schemes, and more; as a few pictures (or even a brief video) make clear, eye-catching is an understatement when it comes to treehoppers.

Morris borrowed and studied approximately 1,000 treehopper samples from Pittsburgh’s Carnegie Museum of Natural History as part of his comprehensive research project. He was eventually able to identify significant physical differences in one of the samples, which had been found in Nicaragua circa 1990. After noting and confirming these appearance variations, Morris and Christopher Dietrich, an entomologist, published their findings, having deemed the new species Kaikaia gaga.

Morris subsequently attempted to extract DNA from the sample, but the effort was unsuccessful. As a result, he intends to visit Nicaragua and search for a live Kaikaia Gaga treehopper, which he believes will help him to answer far-reaching questions about the insect’s history and genetic traits.

Especially with Kaikaia gaga added to the mix, the list of Lady Gaga-derived species and genus names is extensive.

Gaga refers to a genus of 19 ferns, including two species dedicated to Gaga: Gaga germanotta and Gaga monstraparva. An extinct mammal, Gagadon minimonstrum, has also been named after Lady Gaga, as has Aleiodes gaga, a type of wasp.

Lady Gaga—the singer-songwriter, that is—will release her sixth studio album, Chromatica, in less than one month. The work’s first single, “Stupid Love,” dropped on February 28th, and additional singles are expected to debut in the coming weeks.

Additionally, the 33-year-old is slated to embark on a six-stop tour, The Chromatica Ball, between July and August. As part of the concert series, Lady Gaga will perform in Saint-Denis, London, Boston, Toronto, and East Rutherford.

It appears that The Chromatica Ball’s limited scope is reflective of Gaga’s busy schedule. The New York native has been cast in a Ridley Scott-directed film about Patrizia Reggiani, who was found guilty of hiring a hitman to kill her husband, Maurizio Gucci. Maurizio was the grandson of Guccio Gucci, and he led his family’s namesake luxury-fashion brand.