Live Nation Stock Goes Into a Tailspin — $1.8 Billion Lost In One Day 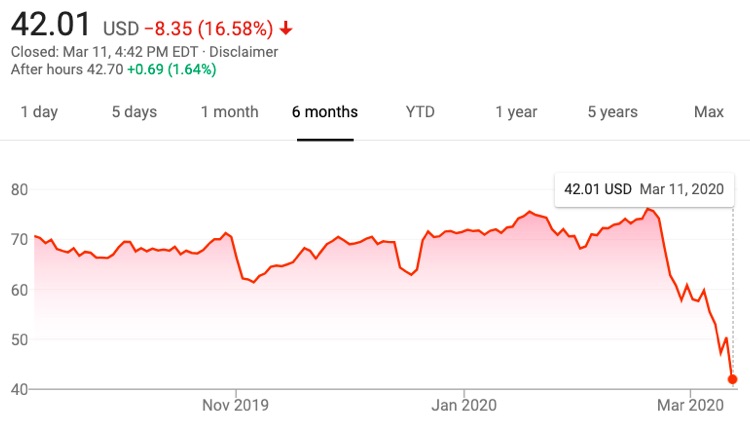 Just ten days ago, Live Nation CEO Michael Rapino was downplaying coronavirus concerns, while pointing to a temporary disruption. “Most of our business doesn’t start until the middle of June onwards,” Rapino stated. “So the next few months, we’ll have some cancellations, I assume, here and there in some arenas and clubs, but the heart of our business happens this summer.”

Wall Street investors are less convinced of that breezy assessment. Earlier this week, we reported on a major slide in shares of Live Nation (LYV). Today, that slide became an avalanche, with shares dropping an additional 16.5% amidst rising concert cancellations and coronavirus pandemic concerns. Doing the math, the one-day plunge on Wednesday amounted to roughly $1.8 billion in stock market valuation.

Even more shocking: LYV shares have tanked roughly 43.3% over the past month, to $42.01 at the closing bell Wednesday. Measured against a recent high of $76.60, that plunge surpasses 45%, which means nearly half the concert giant’s market cap has been wiped out in just a few weeks.

On March 10th, Live Nation’s market cap was measured at approximately $10.8 billion, a figure that plunged to $9.01 billion.

The drop closely follows the postponement of both Coachella and Stagecoach, which are run by rival concert giant AEG.

It also follows the once-unthinkable cancellation of SXSW, as well as a spate of other music festivals and conferences. That is being complemented by a string of artist tour cancellations, which are frankly becoming too numerous to track (though we will try).

On the broader global picture, the World Health Organization (WHO) has labeled the coronavirus outbreak as a ‘pandemic,’ a word almost designed to spark panic. “This is the first pandemic caused by coronavirus,” WHO Director-General Tedros Adhanom Ghebreyesus stated. “We have called every day for countries to take urgent and aggressive action. We have rung the alarm bell loud and clear.”

In the United States, diagnosed cases tipped 1,000 for the first time, and the Trump Administration’s response has been sluggish and disorganized. Other countries have been equally unable to coordinate effective responses. Ghebreyesus said that WHO is “deeply concerned, both by the alarming levels of spread and severity and by the alarming levels of inaction” by various governments worldwide.

“We have therefore made the assessment that COVID-19 can be characterized as a pandemic,” he said.

Whether Rapino’s initial assessment of a temporary issue remains accurate is difficult to determine. Earlier, President Trump predicted that the entire coronavirus issue would ‘miraculously’ disappear in April, though that assessment also remains highly uncertain at this stage.