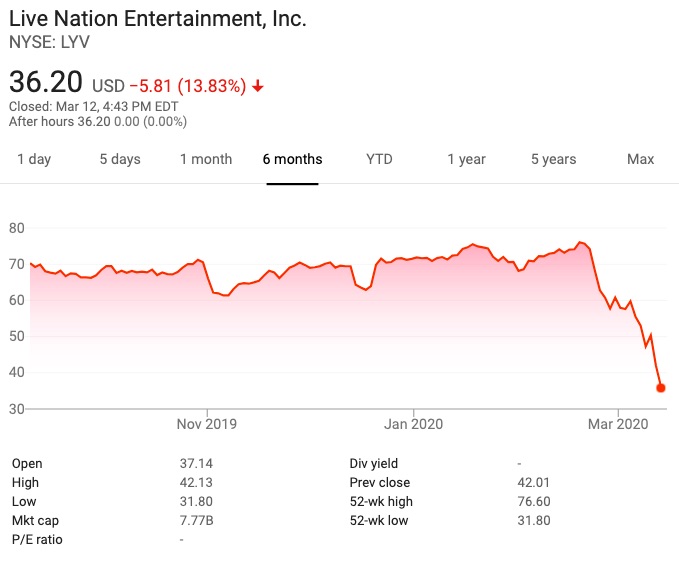 Shares of Live Nation continued nosediving on Thursday, with coronavirus complications causing a valuation loss of more than $8.3 billion.

The plunge is part of a very bad week on Wall Street, based on continued fallout from the worldwide coronavirus pandemic.  But some companies are more exposed than others, and Live Nation — whose entire business depends on large-scale gatherings — is extremely exposed to government-mandated shutdowns and public panic.

Accordingly, shares of LYV dropped nearly 14% in Thursday trading, after dropping nearly 17% on Wednesday.  Yesterday alone, the drop amounted to a valuation loss of roughly $1.8 billion, though that pales in comparison to the broader, 30-day fallout.  On February 12th, Live Nation enjoyed a healthy market cap of approximately $15.84 billion.  After the close of trading today, that figure now stands at $7.52 billion, or a 30-day drop of $8.32 billion.

Back in February, Live Nation was flying-high, enjoying a mid-70s valuation ahead of its lucrative spring and summer seasons.  But that was before coronavirus concerns turned into a global pandemic that derailed nearly every major live event.  But even as recently as two weeks ago, Live Nation CEO Michael Rapino seemed rather unconcerned about the smattering of canceled gigs.

“Most of our business doesn’t start until the middle of June onwards,” Rapino said during an investor call. “So the next few months, we’ll have some cancellations, I assume, here and there in some arenas and clubs, but the heart of our business happens this summer.”

It’s worth noting that today’s plunge comes ahead of a massive bombshell.

It now appears that Live Nation is being forced to postpone all of its concerts, tours, and festivals indefinitely. The concert giant has yet to make an official announcement, and it remains entirely unclear when the freeze would be lifted. An optimistic projection pegs the lift date at the end of March, though that seems increasingly unlikely.

That announcement, perhaps timed after the close trading, could generate another plunge for LYV shares on Friday.