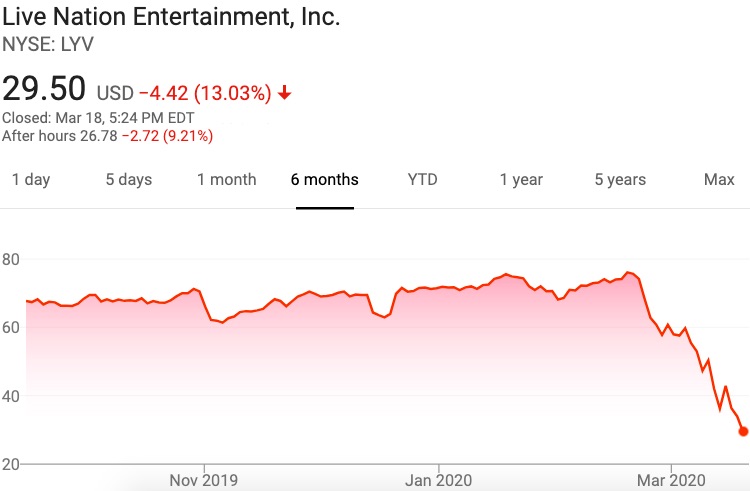 It was a bold-and-daring move designed to inspire confidence among investors and fellow executives — and potentially score a windfall on a temporary drop.  So far, that plan isn’t quite working out: after buying roughly $1,000,000 in sunken shares on Friday, Live Nation CEO Michael Rapino is now counting substantial losses.

Instead of a bounce-back, the free-for-all in Live Nation stock continued largely unabated today (Wednesday).  Earlier, Live Nation made the unprecedented move of suspending all upcoming shows indefinitely in the face of rising coronavirus fears.  Now, that blackout is starting to scare investors and wipe out the company’s shares.

Accordingly, shares tanked nearly 13% in Wednesday trading as the forecast for live concerts grew increasingly gloomy. At the closing bell, LYV shares settled at $29.50, which is nearly two-thirds lower than a recent February high of $76.60. Rapino’s symbolic purchase of $1,000,000 shares happened at a price of $39.98. By the bell on Wednesday, Rapino’s losses approached $250,000.

The situation could easily grow worse.  At one point in Wednesday trading, LYV shares dropped below $22 before posting a late-stage recovery.  That raises the distinct possibility that Live Nation shares will soon plunge into the teens.

Others also bought shares alongside Rapino, including other top-level execs at the live concert giant.  Mark Cuban also jumped in, with equally sour results — at least for today.

Meanwhile, mass-gatherings and concerts continue to get cancelled. Earlier today, mega-festivals Glastonbury and Bonnaroo were forced to cancel or postpone their events, with the New Orleans Jazz Fest also pushing its start date. Those three festivals alone account for hundreds of thousands of attendees. Elsewhere, mega-artists like the Rolling Stones joined scores of other artists canceling or delaying tours, with most venues going dark while music fans stay home.

In terms of financial damage, the Live Nation stock plunge is difficult to fathom. In just one month, the concert giant’s market valuation has tanked by nearly $10 billion. On February 19th — seemingly an eternity ago — LYV shares were dancing in the mid-$70s range, and pushing towards the $80-mark. Now, those same shares are battling to stay out of the teens.