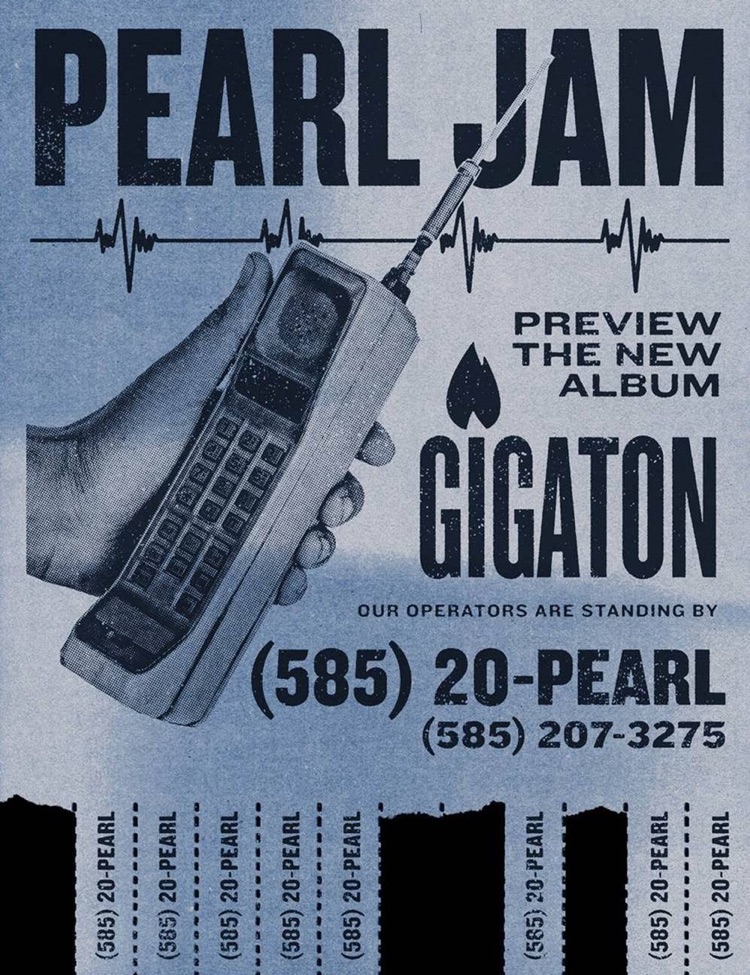 A digital poster for the Pearl Jam Gigaton Hotline.

Though the coronavirus (COVID-19) pandemic forced Pearl Jam to put their much-anticipated Gigaton Tour on ice, the album of the same name is still slated to release on March 27th, and the Seattle band is promoting the record with a Gigaton Hotline.

Upon ringing the number, a friendly (pre-recorded) voice greets callers: “Hello! You’ve reached the Pearl Jam Gigaton Hotline. Press one to leave a message. Press two to opt in to receive updates from the band and preview the new album before it’s out on March 27th.” The message will replay a maximum of three times before the calls disconnects, and the hotline’s creators even thought to have the friendly voice say “goodbye” if the caller fails to select an option.

Pressing one does in fact allow callers to leave a “short” message, and the hotline isn’t specific about what exactly these messages should entail. Presumably, the audio clips will be enjoyed by Pearl Jam members, who are more than likely just as sick of being stuck indoors as the general population—especially when they had been set to embark on an extensive world tour.

Pressing two prompts the hotline’s friendly voice to say, “Thanks for opting in. You should receive a confirmation text shortly.” After that, 30-second-long previews of each Gigaton song initiate. Admittedly, the previews’ audio quality is less than stellar, but the gesture is significant. Callers can replay the previews as many times as they like.

In addition to being Pearl Jam’s 11th studio album, Gigaton will mark the band’s first full-album release in seven years, since 2013’s Lighting Bolt. Two singles have dropped in support of the work: “Dance of the Clairvoyants” and “Superblood Wolfmoon.”

Pearl Jam had intended to kick off the Gigaton Tour with a March 18th concert in Toronto, before proceeding through the United States and, eventually, many European nations.

Unfortunately, the coronavirus pandemic forced a change of plans, and the band intends to reschedule their world tour for later this year. Specific dates are in the works, and the tour’s timetable will undoubtedly depend upon the coming weeks’ and months’ COVID-19 developments.