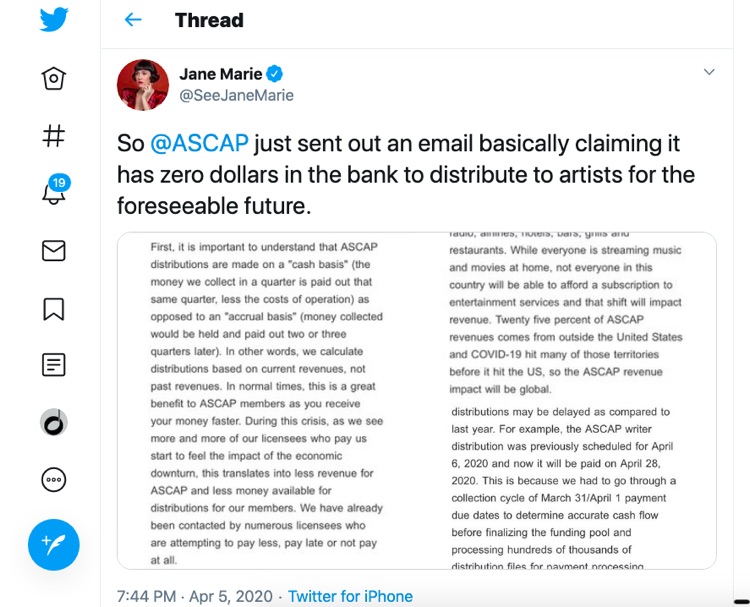 Is this really the best look for ASCAP?

Several days ago, ASCAP CEO Elizabeth Matthews sent a shocking note to hundreds of thousands of member songwriters, composers, and music publishers. The email — almost immediately forwarded to Digital Music News by an irate member — stated that writers wouldn’t be receiving their checks on the normal delivery date of April 6th. Instead, they’d be getting a seriously reduced payment on April 28th (though even that seemed uncertain).

The reason, according to Matthews, is that US-based performance publishing royalties have plunged because businesses have been forced to close down. No customers means no music, which means no money owed for public performances. But even worse, many of these businesses, which have been forced to shut down with zero assistance from the government, are now scrambling to make basic payments (or shutting down entirely) and putting their ASCAP invoices last.

“During this crisis, as we see more and more of our licensees who pay us start to feel the impact of the economic downturn, this translates into less revenue for ASCAP and less money available for distributions for our members,” Matthews stated. “We have already been contacted by numerous licensees who are attempting to pay less, pay late, or not pay at all.”

All of which means — through no fault of ASCAP’s — that performance royalty payments will be lower.  But why aren’t lower-dollar checks even being sent?

That’s where this whole thing gets a little fuzzy.

“We will make key distribution funding decisions later than usual once we have knowable facts of our revenue collections each calendar month and each quarter,” Matthews wrote. “What this means for you as a writer or publisher member is that your distributions may be delayed as compared to last year. For example, the ASCAP writer distribution was previously scheduled for April 6, 2020 and now it will be paid on April 28, 2020.”

The huge problem here is that ASCAP doesn’t pay on actual plays in restaurants, bars, and clubs. Instead, ASCAP uses opaque algorithms and estimates that now have to be reworked to accommodate the lowered amounts. It sounds antiquated, but it’s the way ASCAP does business — and it’s also resulting in artists having to forego a performance royalty check when they absolutely need it the most.

So if artists are being forced to take a haircut, why aren’t executives?

In response to the massive financial challenges imposed by the COVID-19 crisis, executives across the music and entertainment industries are either reducing their salaries, or foregoing them entirely. Earlier today, LA Phil conductor Gustavo Dudamel agreed to forego his multi-million dollar annual salary, and orchestra players and employees took a 35% pay cut to weather the crisis. Elsewhere, Disney’s top execs are either taking $0 or agreeing to major compensation cuts, as are execs and employees at iHeartMedia and CAA that can afford it.

By contrast, Digital Music News has learned that ASCAP executives and employees are getting paid their full salaries, on time and without interruption alongside full benefits. That includes top execs like CEO Elizabeth Matthews, whose salary is believed to be in the low 7-figure range.

The point isn’t being missed by unpaid songwriters, one of the hardest-hit groups in the COVID-19 crisis.  “They should suspend all CEO pay and focus on getting money into artists/writers hands,” one writer tweeted.  “It’s a difficult situation and I hope they do the right thing.”

We asked ASCAP’s media rep, Cathy Halgas Nevins, how much Matthews is earning these days.

We didn’t get a response, even after two attempts. But whatever the top execs at ASCAP are pulling down, they’re not imposing any delays or pay cuts on themselves — even though their member writers are being forced to do exactly that.