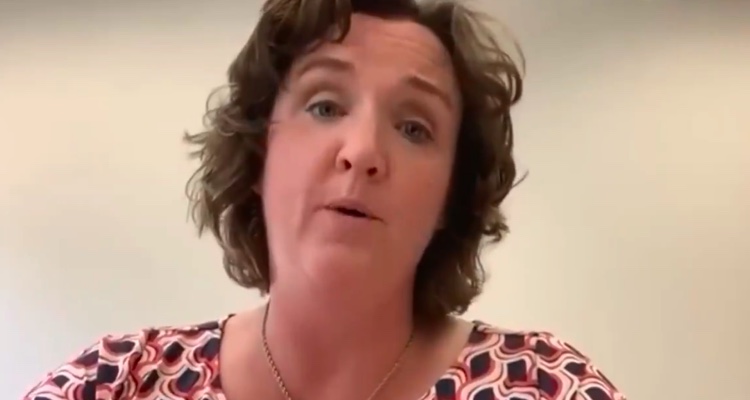 Ticketmaster’s decision to quietly modify its stated policy on ticket refunds is rubbing a lot of people the wrong way — including U.S. Congresswoman Katie Porter.

Ticketmaster has now been put on blast by U.S. Congresswoman Katie Porter, thanks to an extremely unpopular decision to withhold refunds from ticket holders. The decision to refuse refunds while thousands of shows were rescheduled or postponed indefinitely has generated an outcry from fans, some of whom are left holding the bag on thousands of dollars worth of useless tickets.

“I applaud Ticketmaster for continuing to shine in what is apparently a competition to provide the worst customer service in any industry,” the California Democrat tweeted yesterday evening. “Exorbitant ticket fees for negligible benefits — now taking advantage of a crisis to line their pockets? Next level. ??????”

The tweet drew more than 1,000 responses and nearly 50,000 likes in less than 24 hours, with irate fans urging the Representative to punish the ticketing giant. “Sounds like a case for the House Committee on Financial Services, Subcommittee on Consumer Protection and Financial Services,” one person responded. “Know anyone on that?”

Others quickly lumped Ticketmaster into a bucket with major airlines, who apparently also have a problem offering refunds on rescheduled flights. “It really takes work during this pandemic to make the airlines look good!” another noted. “But Ticketmaster has done it.” 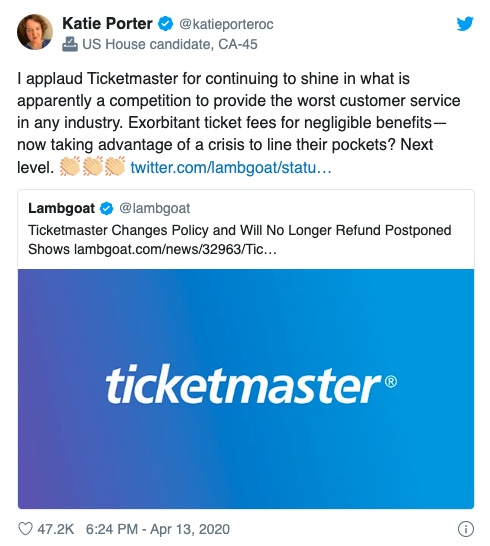 Earlier today, Ticketmaster issued a terse statement on the matter, clarifying that its policy had remained unchanged.

But screenshots prove otherwise: as COVID-19 started shutting down shows nationwide, the ticketing giant covertly eliminated refund offers for anything postponed or rescheduled.  In other words, if it’s not flat-out cancelled, ticket-buyers are stuck with the purchase.

Of course, none of this is good for Ticketmaster or Live Nation executives, a company now fighting to get through 2020 alive.  Just yesterday, Live Nation secured a $120 million emergency loan to weather the storm, with every last show on the schedule either canceled or rescheduled.  Live Nation CEO Michael Rapino, who invested $1 million in depressed Live Nation stock to boost investor confidence, has temporarily given up his multi-million dollar salary.

The meltdown closely follows a U.S. Department of Justice investigation of Live Nation, which focused on the company’s wholly-owned Ticketmaster division.  Live Nation was accused of violating various consent decrees that accompanied the DOJ’s approval of Live Nation’s acquisition of Ticketmaster, which competitors alleged had been violated.  The investigation was wrapped-up in January, however, and critics slammed the DOJ for going easy on Live Nation and closing the case with few penalties.