Rüfüs Du Sol Insists on Canceling, Not Rescheduling, Its Upcoming Shows So Fans Can Get Refunds 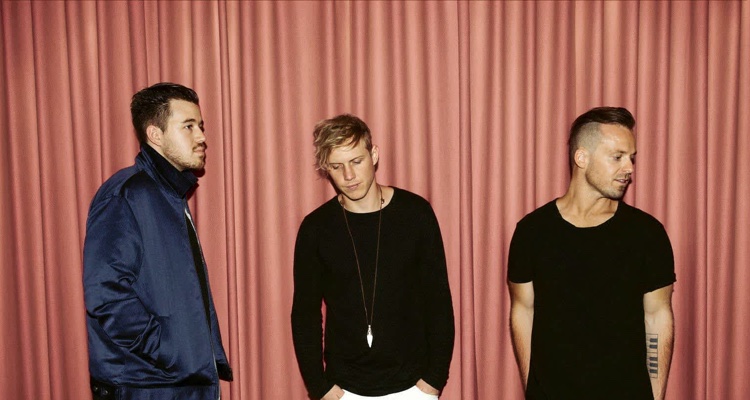 Though seemingly trivial, the distinction between “postponed” and “cancelled” is important for those who’ve purchased event passes through prominent ticketing platforms. An array of companies, including Ticketmaster, are offering refunds only for “cancelled” shows. Thus, many ticketholders are finding themselves stuck with passes to far-off events that they are unable or unwilling to attend.

It’s unclear which ticketing platform(s) Rüfüs Du Sol sold tickets through, but to avoid having fans’ hard-earned cash tied up for an indefinite period, the three-piece group has cleared its concert schedule. Addressing the cancellations in a social-media statement, Rüfüs Du Sol wrote, in part: “It felt important to us that we take the necessary action to ensure that your money gets back to you as soon as possible… It’s a shame that this is the only way forward.”

James, Jon, and Tyrone closed their message by noting that they’re creating new music in isolation, and that they’ll resume “playing shows as soon as it makes sense to do so.” The group’s most recent album, Solace, was nominated for a “Best Dance/Electronic” Grammy at this year’s ceremony, but The Chemical Brothers secured the honor with No Geography. 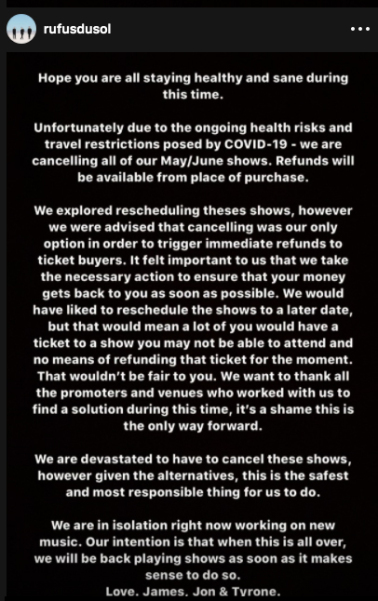 Ticketing services’ fine print and refund terms have faced amplified scrutiny as of late — from fans and politicians alike. Earlier this week, Digital Music News first reported that Ticketmaster had quietly updated its refund policy amid the COVID-19 pandemic; the company subsequently signaled that this policy had remained consistent.

And about one week ago, ticket-resale platform StubHub was named in a class-action lawsuit, after it replaced cash refunds with vouchers for 120 percent of tickets’ initial sale prices.

In a testament to the coronavirus’s impact on the live-event industry, StubHub execs explained their policy change by stating that it is “currently impossible” for them to issue cash refunds.