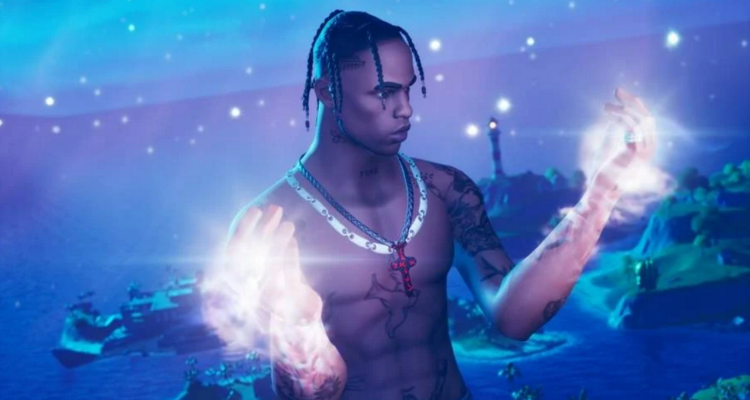 Virtual concerts are likely to become part of the new normal after COVID-19. Their marketing potential is potent in music’s data-driven age.

Travis Scott’s in-game Fortnite concert attracted more than 12 million concurrent viewers. It’s estimated that more than 28 million gamers tuned in to watch via streaming sites. And since Friday, Travis Scott has been blowing up on music streaming sites like Spotify, Pandora, and Apple Music.

On Pandora, for example, Scott ranked as the #2 most added artist station. He jumped 163 spots to become the second-most followed artist, highlighting new fans created from his virtual concerts.

On the same service, his artist station adds increased 540% week over week, according to stats shared with Digital Music News this morning. Streams of his music were up 124% week over week. That represents a tremendous growth potential – and an entirely new revenue stream.

Of course, streaming spikes almost never occur in isolation, unless there’s a platform-specific promotion (though even then, spillover to other streaming platforms can result).  And given that Fortnite and Pandora are distinctly different arenas, a clear ripple effect is starting.  Accordingly, we’re expecting similar lifts across the mega-streamers like YouTube Music, Amazon Music, Apple Music, and Spotify.

Gamers are already primed to pay for virtual swag and merchandise. But they’re also eager for new experiences that only collaborations like Scott’s Astronomical tour can offer.

DJ Marshmello demonstrated that in 2019 when his take on virtual concerts drew 10 million concurrent viewers. But Scott’s Astronomical event blew Marshmello’s DJ set out of the water.

Epic Games set the stage for the concert by dropping hints for players to discover. A stage could be seen in the distance under construction, slowly becoming complete as each day passed.

At the start of the virtual concert, players saw a planet-like object floating toward them. Slowly, everything blew up, and the performance started. The entire Fortnite island became part of the stage. A giant Scott stomped around the island during the opening event.

As tracks changed, the visuals changed to accompany them. At one point, the event features Scott as a cyborg and a spaceman.

If there was any doubt previously, Fortnite has become something much more than a game for the youngest generation — it is now a social platform in itself.