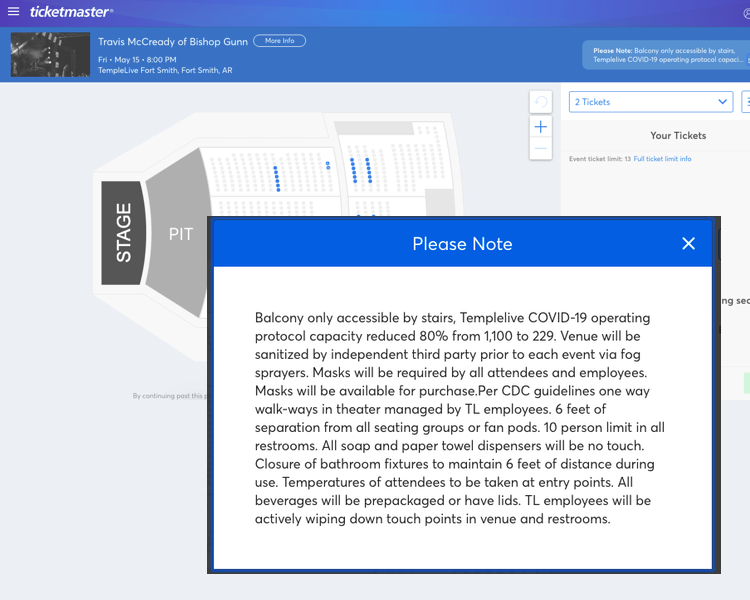 Nobody said hosting America’s first socially-distanced concert was going to be easy. But for country-rock artist Travis McCready of Bishop Gunn, apparently it’s worth it. The show, slated for this Friday, May 15th at TempleLive in Fort Smith, Arkansas, will only be sold at 20% capacity so that people can keep their distance from one another. As a result, the normal venue capacity of 1,100 will be chopped to 229.

But that’s just one of a long list of restrictions and rules that will accompany the show. According to Ticketmaster, which is fulfilling tickets for the event, buyers will be permitted to enjoy the show in groups, but only in restricted ‘fan pods.’ Each pod, in turn, must be at least six feet from any other nearby pod, and no pod can exceed 12 people.

And of course, everyone will be required to wear a mask throughout the entire performance (those who don’t have a mask can purchase one at the venue). Additionally, temperature checks will be taken at the entrance. Most likely, those who are turned away won’t be getting refunds.

For those that have a mask and pass the temperature check, the next challenge is finding the assigned seat. Anyone hoping to enjoy balcony seating will not be permitted to use the elevator, and all hallways and corridors will be one-way only. A majority of the seating rows will be walled off by caution tape.

Grabbing a beer seems simple, but going to the bathroom is more complicated.

All beverages will either be prepackaged or have a lid, which sounds reasonable enough. But bathrooms will be limited to 10 people at a time, and “all soap and paper towel dispensers will be no-touch.” Beyond that, all bathroom fixtures will be unusable, so that people can maintain a six-foot distance from one another.

As for the staff, it looks like disinfecting will be a non-stop chore. Before anyone sets foot into the venue, the entire place will be doused with a disinfecting mist: “Venue will be sanitized by independent third party prior to each event via fog sprayers,” the site advises.

On top of all of that, there’s a small issue with the governor of Arkansas. “As advertised, this concert does not comply with our Department of Health directives for indoor entertainment venues,” state governor Asa Huthinson emailed the New York Times. “I appreciate the venue owners’ working to enforce social distancing and the wearing of masks to protect the concertgoers, but the concert remains outside of the state’s pandemic directive.”

So technically, after all the fog-spraying and pod-regulated seating, this show could get shut down by Arkansas state authorities.

But does anyone really want to attend a show this early in the reopening, anyway? Just last week, a nationwide survey indicated that fewer than 10% of Americans would attend a show in today’s environment. Perhaps unsurprisingly, ticket sales for McCready’s show still have lots of available ‘pods,’ though tickets are clearly selling.

Separately, other socially-distanced concert experiments are also happening, both in America and abroad.

Currently, drive-in movie theaters are the preferred venue choice, with YouTuber Marc Rebillet hosting the first car-based tour in the U.S.  That follows similar experiments in both Germany and the Netherlands.