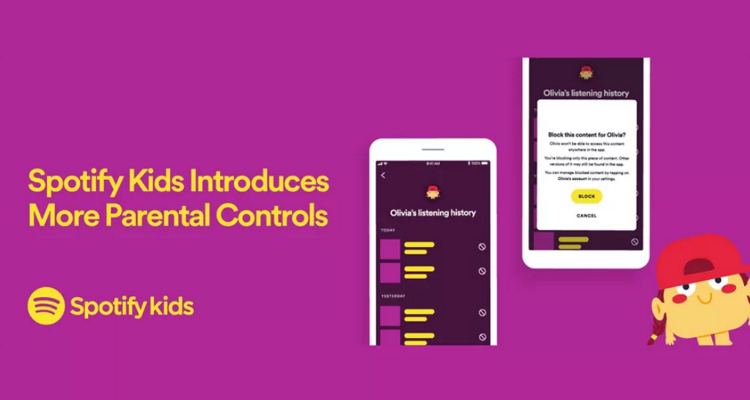 Spotify is announcing two new features for its Spotify Kids app, giving parents more control. The app will allow parents to access their kids’ listening history. That includes every track the child has streamed over the last three months.

Tracks can be blocked from the same page by tapping the block icon next to each music track. Blocked content is linked to each child’s account. That means parents can block songs for their 7-year-old but still allow their 14-year-old access.

The Spotify Kids app offers access to 8,000 songs, stories, audiobooks, and more. That’s an increase of 2,000 additional tracks than at launch, back in October 2019.

Spotify received criticism last year when it started locking down family plan sharing. Before the kids’ app, Spotify Family accounts served little purpose beyond lowering prices for households. Now the Kids app is just one perk of having a Spotify family plan. With the launch of new Spotify Kids controls, the Kids app is launching in two new markets. Parents in Japan and Germany will join those in 14 other markets where the app is available.

Spotify’s focus on making its service more family-friendly comes in an era of high scrutiny. YouTube found itself in hot water after disturbing content began seeping its way into children’s playlists. TikTok, the short-form video app, paid a record fine for violating child privacy laws in the United States.

By giving parents more control over what their kids listen to, Spotify is also off-loading some responsibility. The Kids app is a walled garden for younger listeners, with kid-approved material pre-vetted before it even goes live. That prevents Spotify’s algorithms from selecting a Wiggles song and Lil’ Wayne back-to-back a-la YouTube.