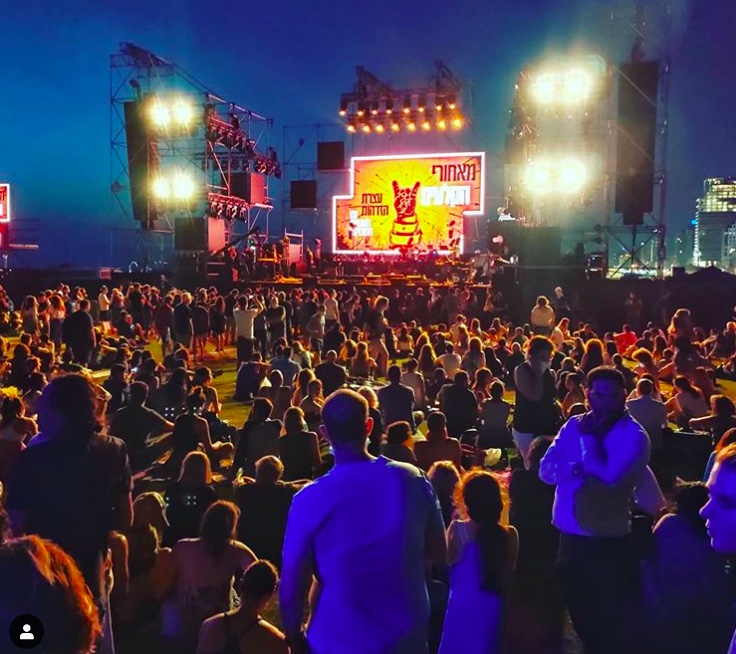 On Friday, 3,000 Israelis gathered in a park in Tel Aviv to protest the country’s coronavirus restrictions. Israel has been in lockdown since mid-March, which has all but ended the local entertainment industry. The event yesterday was billed as a protest of the COVID-19 lockdown, rather than a concert.

Tel Aviv’s mayor joined the protest of the government regulations, saying: “This is the cry of an entire industry that needs answering. The responsibility lies first and foremost with the Israeli government, and I’m appealing from here – don’t forget the culture!”

Thousands of people gathered to watch “Behind the Scenes: an Assembly of Solidarity” in Tel Aviv.

Organizers of the event exploited a loophole in Israel’s lockdown regulations to hold the event. The loophole effectively allows contained protests to continue. Organizers asked all attendees entering the park to wear a mask and practice social distancing.

But social distancing guidelines are hard to follow when you’re in a packed park. Many videos and pictures on social media show people dancing together without masks. Currently, Israel has 16,680 confirmed cases of COVID-19 and 279 confirmed deaths.

The packed concert park looked no different than any other live music festival, which is drawing a mix of both negative and positive reactions. With this gathering a ‘success,’ more Israeli business owners in the entertainment industry are suddenly encouraged. Tel Aviv’s Barby club owner is quoted as saying: “On the 18th of the month, we’re opening, period.”

The impact of large gatherings like this won’t be known for at least two weeks. Shortly after states like Texas and Georgia re-opened in the US, they began experiencing their highest case rates yet. And re-opening too quickly could have dire economic consequences across the globe, including the spread of fear. On that note, a recent poll of Americans in April found that only 10% said they would be willing to attend a live concert or festival right now. In the end, it doesn’t matter if venues are open if people feel scared.