Kanye West Is Officially the Richest Musician In the World 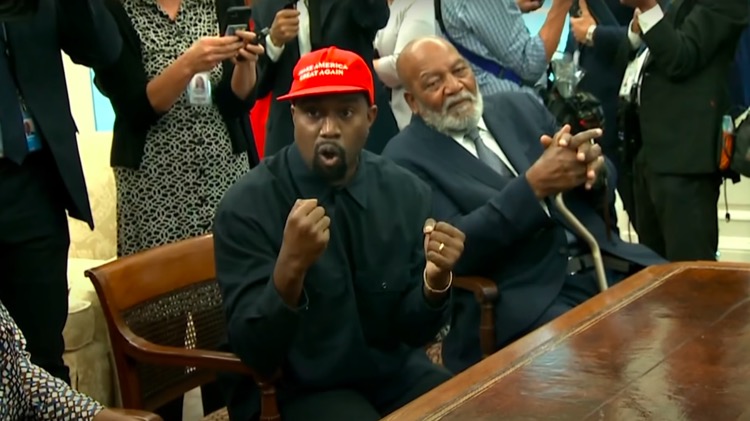 Kanye West during a 2018 meeting at the White House: ‘That Adidas deal made me a billionaire’.

Kanye West has been proclaimed the wealthiest musician of 2020, with annual earnings topping $170 million.

West — who has long proclaimed himself a billionaire — has now been named the highest-earning musician of the year by Forbes.  In a celebrity ranking issued today, the wealth-chronicling magazine estimated that West had earned a healthy $170 million over the past year, a figure that easily puts him ahead of every other musician in the world.

West was actually number two in the overall entertainment and celebrity ranking, however. Claiming first place was none other than Kylie Jenner, who deposited a healthy $590 million during the same period. Between West and his sister-in-law alone, that’s roughly three-quarters of a billion dollars in annual earnings, which doesn’t even count money earned by Kim Kardashian.

Forbes compiled the ranking using pretax earnings from June 2019 through May 2020, prior to payments made to staffers, managers, lawyers, and agents.

Despite earlier quibbles with West, Forbes has now solidly pronounced Kanye a billionaire.  According to the magazine, West enjoys a net worth of roughly $1.3 billion, thanks largely to his ultra-successful Adidas-branded Yeezy sneaker line, which is complemented by a range of Yeezy-branded fashion apparel.

“This Adidas thing made be a billionaire,” Kanye proclaimed during a visit with President Donald Trump at the White House back in 2018 (pictured above).  “And I could have lost $200 million walking away from that deal.”

West earned the top slot by an extremely large margin.

Indeed, the next musician on the list was Elton John, who raked in a healthy $81 million in annual earnings, which earned the legendary singer a 14th place slot in the celebrity list overall.  Beyond that, Ariana Grande earned a 17th-place slot with $72 million, while the Jonas Brothers grabbed a 20th-place position with $68.5 million in annual earnings.  The latter three artists earned most of their revenues from heavy-selling tours, which are now impossible due to COVID-19 concerns and nationwide violence.

Appropriately, the cash-rich Kanye recently paid to cover the entire college fund for George Floyd’s daughter, while also giving $2 million in additional donations. The contribution comes ten days after Floyd passed away during his arrest in Minneapolis, and follows a rash of violent looting, arson, and clashes with police in dozens of major cities nationwide.

The $2 million donation will be distributed to funds for the families of Ahmaud Arbery, Breonna Taylor, and George Floyd. Floyd’s surviving daughter, Gianna, is 6-years old.