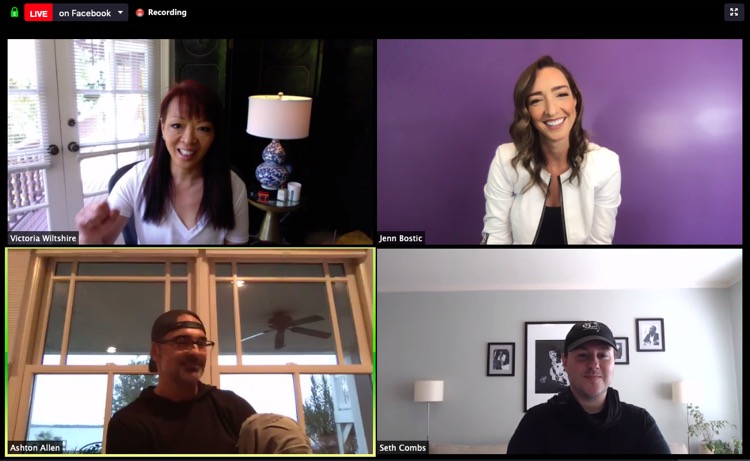 Digital Music News was on hand for the follow-up Happy Hour iteration, which welcomed Ashton Allen, Rabbit! band member and CEO of music production agency Rock Salt Music, as well as Berklee College of Music graduate and “Jealous of the Angels” singer/songwriter Jenn Bostic.  Also on hand was marketing professional Seth Combs, who helped launch Beats by Dre and who serves as CMO of Sessions Live, a cutting-edge virtual-music platform.

Songtradr’s Victoria Wiltshire moderated the hour-long conversation, and thanks to the participants’ unique perspectives and invaluable experiences, viewers were provided with no shortage of useful monetization knowledge.

All three of the Happy Hour speakers are aware of the substantial potential profit and exposure that sync licensing offers.

But as the co-founder and operator of a firm that specializes in linking adverts with well-suited music (and a man who’s facilitated sync deals with Verizon, Vans, Samsung, and The Walking Dead), Ashton Allen’s opinion of sync and its outlook carries particular weight.

In this vein, the Rock Salt Music chief bluntly reiterated what many artists and industry specialists have long known: “Sync is one of the few ways to make a decent living or a decent income in music.”

But the key to maximizing sync deals and income, according to Allen, is being authentic and creating from the heart, as opposed to crafting tracks with the sole intention of closing sync agreements.

However, Allen proceeded to indicate that authenticity and fun aren’t mutually exclusive. As the duo Rabbit!, he and his musical partner, Devin Moore, have worked tirelessly to produce hopeful, energetic tracks – while assuring that they have a pleasant time with the process.

“We’re just enjoying making music,” noted Allen in describing his creative successes, as compared to the relative lack of success he had as part of a label-signed band during the 1990s.

Similarly, each of the Songtradr Happy Hour participants acknowledged the considerable perks of resonating with fans – and not solely by posting on social media.

First, the 34-year-old emphasized the importance of connecting with fans through music, agreeing with Allen that songwriting and stylistic authenticity are integral.

“I feel like naturally you’re going to connect [with fans] as an artist if you’re being vulnerable,” said the Philadelphia native. “If you’re writing from the heart, they’re [the fans are] gonna like your music.”

Bostic also relayed that she herself had failed to write from the heart early in her career – and that she made a change when bringing “Jealous of the Angels” to life. The heartfelt track was inspired by the passing of Bostic’s father, and it’s the most popular work she’s released to date precisely because it makes an impression upon listeners and fans.

On the topic of social media, Bostic, like Seth Combs, maintained that platforms are a means of becoming closer with fans – not an end in themselves. Artists who’ve developed a following but haven’t yet achieved widespread popularity should make a point of responding to fan messages, per Bostic, as opposed to simply posting about new releases and performances.

And that’s because any listener who enjoys a song so much that they contact its creator will probably become a supporter with a bit of interaction.

Appearance and Outreach Are Everything – Especially During Livestreams

Seth Combs doubled down on the idea of social media platforms being tools, not solutions – “TikTok is not your answer to becoming a star, it’s a medium to connect with fans” – and on the potential associated with livestreaming.

“You can be making money from livestreaming,” he said. “That’s what we [Sessions Live] do every day.”

Perhaps the most significant contributor to success, though, is presenting oneself to fans in an accessible fashion; of inviting them into one’s own world and capitalizing upon the inherent advantages of a personalized connection.

Expanding on the point, Combs told the story of a Romanian artist who works with his company. She’d spent many years honing her music skills, but was still having an immensely difficult time attracting livestream viewers. The up-and-coming artist went as far as stating that YouTube “hated her.”

But after aligning with Sessions Live, this same musician began earning $2,000 or so per week for just three hours of livestreaming. The income hike resulted not from a reinvention of the artist’s style, but from a few tweaks to her appearance and fan-outreach practices.

“It’s your ability between songs to connect, to interact with fans, that will truly transform your career,” declared Combs. “Let the fan fall in love with you, because that’s where the true connection happens.”

Possibly the most noteworthy element of this Songtradr Happy Hour event was the universally applicable nature of its information and knowledge; it’s rare to happen upon one-size-fits-all advice in the music world, which is comprised of a variety of individuals, styles, and fans.

But regardless of whether an artist is just starting out or has been developing for multiple years – regardless of a professional’s genre, location, and goals – the disclosed monetization tips are sure to be helpful.

Fans can catch the full replay of Songtradr’s Happy Hour on YouTube. The next edition – scheduled for Thursday, June 11th – will be titled Music Through the Ages: Soundtrack or Catalyst for Change?