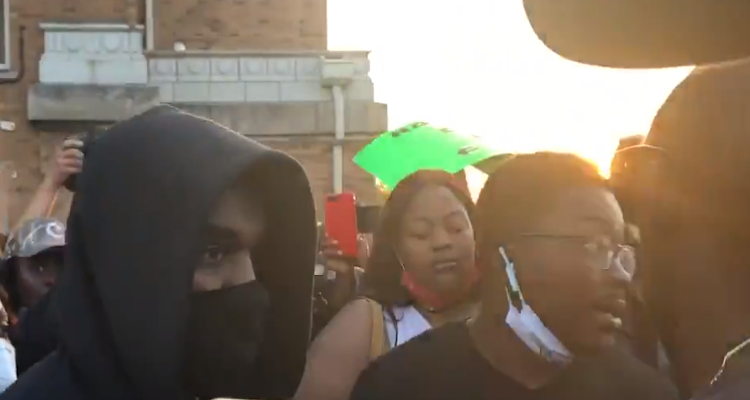 Rapper Kanye West was spotted yesterday in a protest in Chicago’s South Side, and brushed off some unexpected criticism. The 42-year-old has donated heavily to the families of unarmed African Americans who perished due to violence – including covering college tuition costs for George Floyd’s daughter, Gianna.

Dawning a sweatshirt and a bandanna mask despite the relative heat, Kanye West joined the South Side protest march after reaching out to GoodKids MadCity, a non-profit organization seeking to end violence and poverty in cities, particularly among minorities.

The “Stronger” singer ultimately took charge and led the large crowd to the Chicago Police Department headquarters, where the peaceful protest continued. Ja’Mal Green, the event’s main organizer, called for CPD officers to be removed from local schools.

Though the crowd appeared to welcome and embrace West (who was born in Atlanta, Georgia, but calls Chicago home), activist Taylore Norwood felt compelled to announce, via megaphone: “This is a youth-led rally. This is not a celebrity pop-up. You will not hijack this rally from the people who organized it.”

Evidently, however, West’s participation didn’t cause enough friction to stop the peaceful function from taking place.

In terms of donations, Kanye West – who is officially the richest musician in the world – gave $2 million to support the families of Ahmaud Arbery, Breonna Taylor, and George Floyd. And as previously mentioned, West has also moved to pay for six-year-old Gianna Floyd’s future college-education costs.

Aside from Kanye West’s $2 million in aid, The Weeknd’s donation appears to be the largest made by any single artist or music industry professional since George Floyd perished on May 25th.  Meanwhile, the Official George Floyd Memorial Fund has earned over $13 million to date – the most of any campaign in GoFundMe history.