Is McCabe’s Guitar Shop In Santa Monica Really Shutting Down? 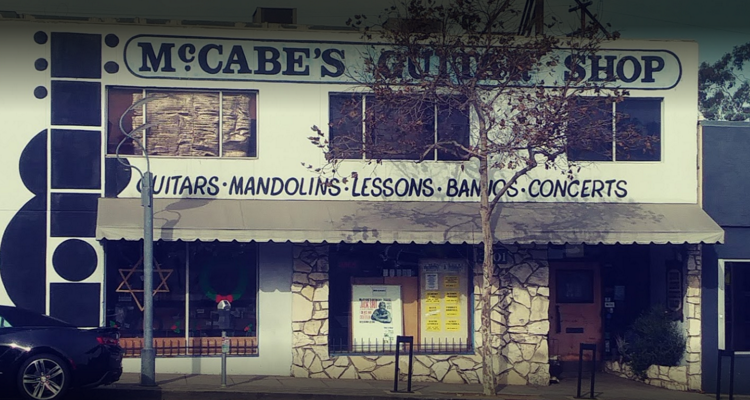 Bob and Esperanza Riskin co-own the famous guitar shop in Los Angeles’ West Pico District. The guitar shop and its live stage were shuttered during the COVID-19 lockdown, leaving musicians high and dry. The Riskins have owned and operated McCabe’s Guitar Shop for over 50 years – since it opened in 1958.

Rumors swirled that McCabe’s Guitar Shop may close after being denied a loan through the Paycheck Protection Program. However, their second application for PPP was approved. The Riskins have announced they are retiring from the business, though.

“It’s sooner than we wanted to [retire],” Esperanza says. “It’s kind of been heart-wrenching, actually. We’re really sad.” The Riskins are in their 70s now and fear contracting COVID-19 from their many customers. They’re currently in the process of transitioning the store’s operations to their daughter and son-in-law.

“I can’t endanger my husband by coming here and getting it, or endanger myself,” Esperanza told the Los Angeles Times. The news of the Riskins retiring soon evolved into rumors the store would close permanently. The Riskin’s’ son-in-law says the store even received flowers in the wake of the rumors online.

The original owners are taking a step back and passing the torch – but no, McCabe’s Guitar Shop is not closing.

“Bob and Espie have been talking about the transition for years, and our plan was to do it probably two, three years from now,” son-in-law Walt McGraw told Variety. “The only thing that’s changed is that they want to retire a little sooner, and it’s mostly just because they’re a little older and want to be careful about their health.”

Unfortunately, the concert hall at McCabe’s Guitar Shop won’t be re-opening any time soon. The room seats 150 people, meaning social distancing would only allow for 40 patrons at a time. McGraw says McCabe’s will look into streaming to help musicians get their music out there.