The Trump Rally Playlist — What Songs Were Played In Tulsa? 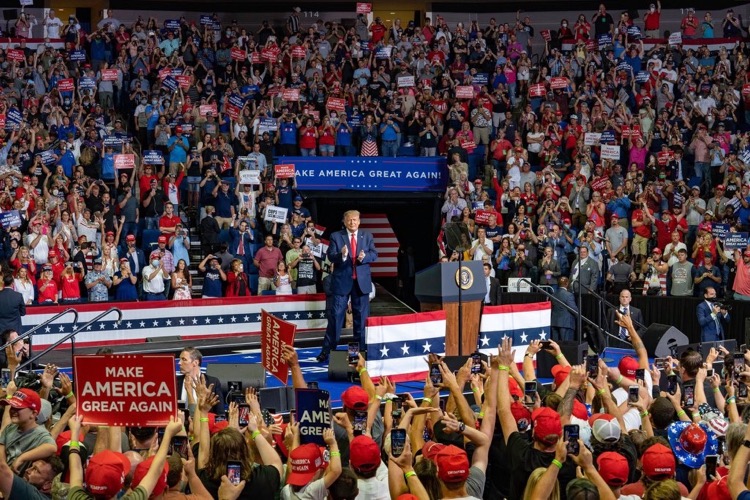 President Trump’s first rally since the COVID-19 lockdown just went down in Tulsa. Here’s a list of the songs that were played.

The president’s use of music during his massive rallies is contentious among artists — to say the least.  Artists like Aerosmith, R.E.M., Prince, Rihanna, Queen, the Village People, and countless others have objected to their music playing during rallies. But there’s not much they can do about it because of how U.S. copyright law works.

Trump holds his rallies at massive arenas that have extensive music performance licensing agreements to play these songs. That leaves artists who are offended by a Trump rally playlist appearance with little recourse. They can object publicly and ask Trump to stop playing their music — but legally, there’s little recourse.

Trump’s rallies usually focus on classic rock, sometimes pop, and weirdly once, Celine Dion’s theme song from Titanic and even music from the Broadway musical Cats.

In Tulsa on Saturday night, here’s a list of the songs that were played.

“Only In America”
Brooks & Dunn

“I Won’t Back Down”
Tommy Petty

“She’s a Rainbow”
The Rolling Stones

“You Can’t Always Get What You Want”
The Rolling Stones

This song usually plays as Trump prepares to take the stage at the beginning of one of his rallies. Greenwood himself is a Conservative Christian, so he approves of the president’s use of his song. “Donald Trump is a patriot,” Greenwood says.

R.E.M. – “Losing My Religion” and “Everybody Hurts”

R.E.M. has been one of the most vocal groups about suing Trump for using their music. They recently announced they are considering legal action against the campaign if Trump continues to play their music. Will either one of these songs make an appearance tonight in Tulsa?

Queen – “We Are The Champions”

Trump used this famous Queen song several times during his 2016 rallies. Eventually, the band asked him to stop playing the song, and it worked – for a short time. Last October, Trump played “We Will Rock You” without permission.

Trump regularly plays this Guns N’ Roses hit at his rallies. The song was originally written by Bob Dylan, who hasn’t commented on its usage at any of the rallies. Axl Rose tweeted that he thought it was ironic Trump supporters “listen to a bunch of anti-Trump music at his rallies.”

Trump is fond of this one and played it multiple times at a rally in Milwaukee. The Michael Jackson Estate hasn’t said anything publicly about Trump playing his music. The two were friends when Jackson was alive.

Trump has played both “YMCA” and “Macho Man” at his rallies in the past. After the recent protests, one of the lead singers asked the president to refrain from playing their music at his rallies.

Elton John is one of the biggest objectors to finding his music in a Trump rally playlist. Trump loves Elton John’s music and often plays it at his rallies. Trump even used “little Rocket Man” to refer to North Korea’s dictator, Kim Jong-un.

Trump has played this one a few times at rallies in the past. Sir Paul McCartney has directly criticized the U.S. president in a new song called “Despite Repeated Warnings.”

This Brooks & Dunn song has been used at the last three presidents during their campaigns, to be fair. Neither singer has objected to the use of the song for campaign purposes. Brooks called Obama’s use of the song “very flattering.”

The band members of Journey are split on their Trump rally playlist appearance. Guitarist Neal Scheon has expressed his frustration with the campaign using this song. While bandmates Arnel Pineda, Jonathan Cain, and Ross Valory visited the White House in 2017.

Neil Young has been a vocal Trump critic, and in 2018 he asked the campaign to stop using his music. Later comments reveal that Young hopes Trump is voted out this year, so let’s see if his music appears on a Trump rally playlist.

Billy Joel wore a Star of David in protest of the president during a stage performance after Trump’s “very fine people on both sides” comments. The comments came after a white supremacist drove through a crowd of people in Charlottesville and killed one person.

Celine Dion – “My Heart Will Go On”

Celine Dion was one of many artists (also Elton John) who were invited to perform at Trump’s 2016 inauguration. Both Dion and John declined to appear.

We’ll never know Sinatra’s opinion on Trump using his music during the campaign, but here’s an interesting tidbit. According to Sinatra’s former manager, Sinatra told Trump to “go f—k himself” after Trump tried to renegotiate an Atlantic City casino contract with him. But maybe they ironed things out.

Who knows how Turner feels about appearing on a Trump rally playlist. Her opinion isn’t public either way.

Phil Collins – “In The Air Tonight”

Collins went on record with Billboard in 2016, saying he believes Trump is “a big accident waiting to happen.” Still, he hasn’t publicly asked the president to stop playing his music at his rallies.