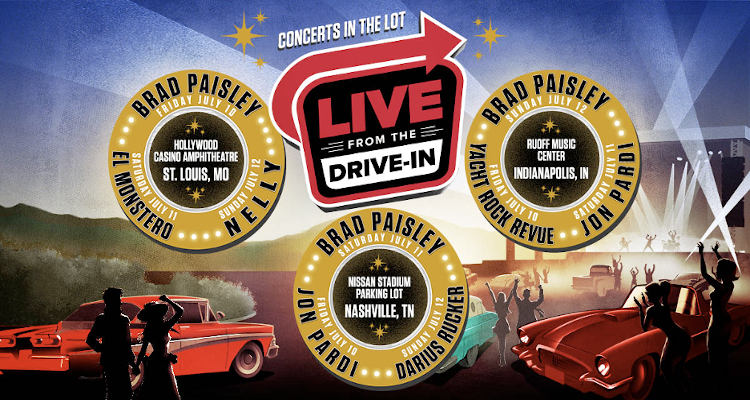 Live Nation is set to deliver a drive-in concert series, dubbed “Live from the Drive-In,” to U.S. fans.

Grammy-winning country artist Brad Paisley will perform in all three of the current “Live from the Drive-In” cities – St. Louis, Nashville, and Indianapolis.

The drive-in tour’s passes will cover one vehicle (with up to four passengers), and attendees are encouraged to tailgate in the designated space (spanning 18 feet in length and nine feet in width) beside their cars. An empty space of the same size will separate each tailgating area from the next vehicle over.

Addressing his company’s innovative drive-in shows, Tom See, Live Nation’s President of Venues – US Concerts, said: “Around the world, we’re seeing a real eagerness from our fans and artists to safely get back to the concert experience. We are excited to unveil Live From The Drive-In – a completely unique outdoor concert series that will allow fans to enjoy live shows again, while socially distanced.”

Elsewhere, Garth Brooks’ 300-venue drive-in concert will take place this Saturday, June 27th, and YouTuber Marc Rebillet is preparing to close his drive-in concert series – the first in the United States – on Sunday.