Another Country Singer Slammed for Playing a ‘Super-Spreader’ Concert 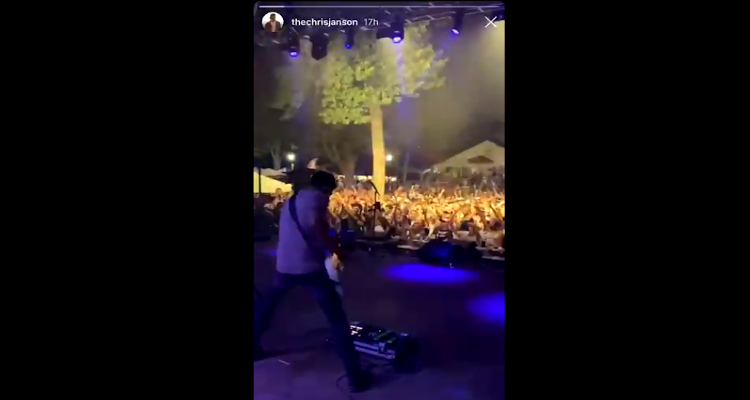 Yesterday, Digital Music News was first to report on the backlash country music star Chase Rice faced after playing a packed concert – dubbed a “super-spreader” by some – amid the novel coronavirus pandemic. Now, country singer Chris Janson is also grappling with criticism for performing a non-socially distanced gig.

“Oh look, Chris Janson also doesn’t care about the health of his fans! I used to work for his management company, but they laid me off in April, so now I can come right out and say that this is reprehensible, yay!” stated Pastorek.

Janson has avoided addressing the subject on social media, but the organizer of Gordy’s Hwy 30 Music Festival has defended the three-day event in multiple interviews. Essentially, Gordy’s justified the happening by pointing to bolstered safety measures (namely “mandatory” hand sanitizer stations and space for fans to spread out) and compliance with local and state requirements.

On Thursday, June 11th, Idaho Governor Brad Little announced that his state was proceeding with “stage four” of its reopening plan, which allowed all businesses and venues to reopen their doors while adhering to health and safety guidelines.

To date, medical professionals have diagnosed 5,770 Idahoans with COVID-19, and 91 of the state’s residents have perished as a result of the disease’s complications.

Despite the defense set forth by the festival’s promoter, many on social media are voicing their disapproval with Janson’s playing.

“I hope these artists get sued into bankruptcy. They deserve it for jeopardizing people’s lives like that. Also, anyone attending these shows needs their head checked, big time. This isn’t normal to risk your life in this manner, certainly not for a music show,” wrote a different individual.

On the other side of the argument, some fans are backing Chris Janson and his decision to partake in the festival.

“Well, for your information, he was not close to anyone. He stayed away from everyone. It was people’s choice to go. The governor approved the THREE DAY CONCERTS THAT WENT ON!!!!! We can’t live in a bubble forever. No wonder you got fired,” tweeted a pro-Janson fan, responding to Pastorek’s message.

Elsewhere, in Europe, Dutch DJ Don Diablo is also dealing with fan backlash, albeit for playing a Cologne, Germany, arena.