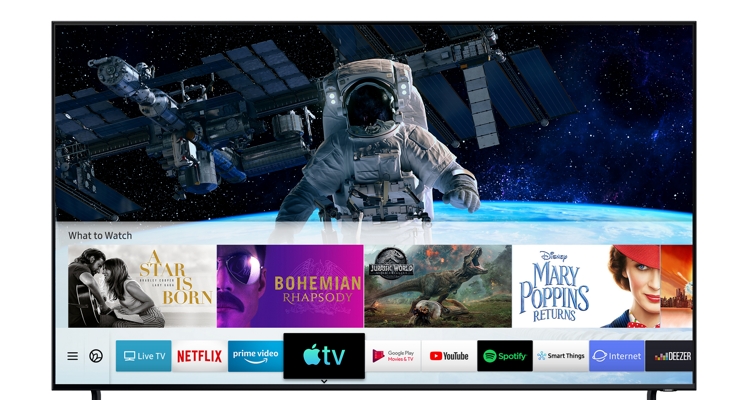 Apple Music lyrics rolled out to Mac users in February. Soon after, Apple announced it would bring its music app to Samsung Smart TVs. The move is spurred by increased music listening on smart devices in the home. A recent study found that smart TV music listening is on the rise during the coronavirus pandemic.

Apple Music synchronous lyrics are available for Samsung Smart TVs from 2018 to 2020.

“Real-time lyrics on Apple Music are seamless and intuitive on Samsung Smart TVs,” Apple noted. “Users can scroll through a song by scrolling through the lyrics, jumping to a specific verse, or jumping straight to the chorus. As soon as a user starts playing a song with time-synchronized lyrics, each verse is automatically displayed on the screen along with the music so that users can follow it as they listen.”

The partnership between Samsung and Apple is an interesting one. Apple Music is available on Samsung Smart TVs, but Spotify is the default music player on Samsung’s smartphones.

Apple Music’s considerable lead on Spotify’s lyrics gives it an advantage. The acquisition of Shazam has played into that, but Apple Music also has official partnerships with Genius for lyrics. Samsung also supplies OLED panels for the iPhone, though that exclusivity window is coming to an end.

Spotify is making its own in-roads to give its users access to real-time lyrics – but not in the US.

Last November, Spotify began testing real-time lyrics in select markets. Last month, the company announced the feature would roll out to 26 additional markets across the globe. Most of those markets are centralized in Southeast Asia, India, and Latin America. It’s the first time lyrics have been offered in 22 of the 26 markets.

Spotify made that possible in a deal with lyrics provider Musixmatch. Users in Canada served as a testbed for real-time lyrics, but they were removed from the wider rollout. Spotify’s implementation of real-time lyrics is much more ham-fisted than Apple’s, though. Users need to tap the ‘Lyrics’ button at the bottom of the ‘Now Playing’ screen to access the lyrics.

The delay of Spotify’s real-time lyrics rollout shows just how complex lyric licensing can be. Legally licensing lyrics on streaming services involves being careful about your provider. Last year, Genius sued Google and LyricFind for $50 million for stealing lyrics from its website.