Is TikTok Getting Banned? 25 Members of Congress Urge Trump to Follow India’s Example 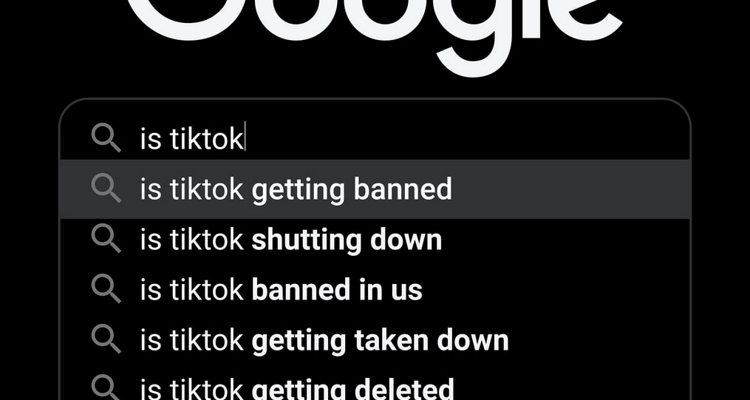 Twenty-five members of Congress have sent a letter to Trump, urging him to take action by banning TikTok.

The letter is dated July 15 and points out India’s steps to ban TikTok and 58 other Chinese-owned apps. “It is clear that the United States should not trust TikTok or any other Chinese-affiliated social media websites or apps to protect Americans’ data, privacy, or security. As such, we urge you to take strong action to stop the CCP’s sophisticated espionage campaign against our country and protect our national security,” the letter reads. 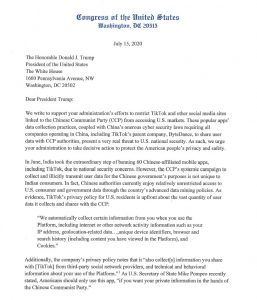 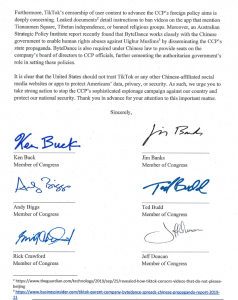 Is TikTok Getting Banned?

These shady information practices are the same reason the U.S. Army, Navy, and Marines banned TikTok on government devices. The issue has come to the forefront of government attention after India’s TikTok ban. The letter highlights TikTok’s vast privacy policy highlighting the data it collects as proof that it is a national security concern.

“We automatically collect certain information from you when you use the Platform, including internet or other network activity information such as your IP address, geo-location related data, unique device identifiers, browser and search history, content you have viewed on the Platform, and cookies.”
– TikTok’s U.S. Privacy Policy

The letter also highlights a report from the Australian Strategic Policy Institute. That report found that ByteDance works closely with the Chinese government to enable human rights abuses against Uyghur Muslims. ByteDance must comply with Chinese law to provide seats on the company’s board of directors to CCP officials.

In recent weeks, the Trump administration has begun to take a hardline stance against TikTok. In an interview, Secretary of State Mike Pompeo admits a ban is something that’s on the table. “It’s something we’re looking at,” he said at the time.

Days later, Peter Navarro, a White House official, called TikTok’s new CEO an “American puppet.” He says the strategy of trying to put an American in charge of the company won’t work. “If TikTok separates as an American company, that doesn’t help us because we’re going to have to give China billions of dollars to have TikTok operate on U.S. soil,” he said.

In an interview with Fox News, Navarro outlined how TikTok presents a national security threat. “TikTok, WeChat, I suspect the president is just getting started with those two,” Navarro says.