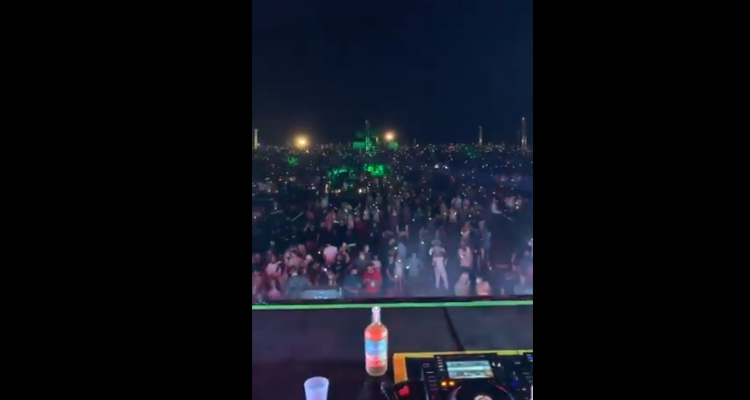 A shot of The Chainsmokers’ recent charity gig in Southampton.

The controversial Chainsmokers gig went down on the evening of Saturday, July 25th, from Southampton (and specifically Water Mill, a hamlet within the town). Tickets to the JAJA Tequila- and Bumble-sponsored charity event cost as much as $25,000, with high-rollers who fronted the cash gaining exclusive access to a decked-out RV. (The “Gold Pass,” the cheapest of the function’s passes, set four attendees back $850.) Profits from the show benefitted three organizations: No Kid Hungry, the Southampton Fresh Air Fund, and the Children’s Medical Fund of New York.

In addition to spacing cars apart, promoters reportedly checked attendees’ temperatures and distributed both masks and hand sanitizer. Moreover, the team behind The Chainsmokers gig indicated ahead of time that general admission fans would be unable to leave their designated 300-square-foot spaces except to use the restroom, and that they would have to wear a mask when doing so.

Some footage from the approximately four-hour-long set seems to show fans employing modest social distancing measures. However, a more widely circulated two-second-long clip – which Governor Cuomo included in his tweet announcing the investigation – appears to show a substantial number of fans grouped closely together to enjoy the live music. Evidently, The Chainsmokers themselves captured and released the video – a perhaps instinctive promotional technique that has also amplified pandemic-related backlash for other artists.

In his social media statement on the “egregious social distancing violations,” an outraged Governor Cuomo said: “I am appalled. The Department of Health will conduct an investigation. We have no tolerance for the illegal & reckless endangerment of public health.”

Some Twitter users are criticizing the governor’s statement – particularly by expressing the opinion that he has been slow to condemn non-socially distanced elements of ongoing protests – while others are voicing their support for the message and, more broadly, stringent social distancing requirements.

At the time of this writing, The Chainsmokers hadn’t publicly responded to the Department of Health’s investigation or to pushback from some on social media. Yesterday, we reported that DJ Kaskade was facing criticism after possibly hosting a boat-party concert – though he has yet to address the matter on social media.