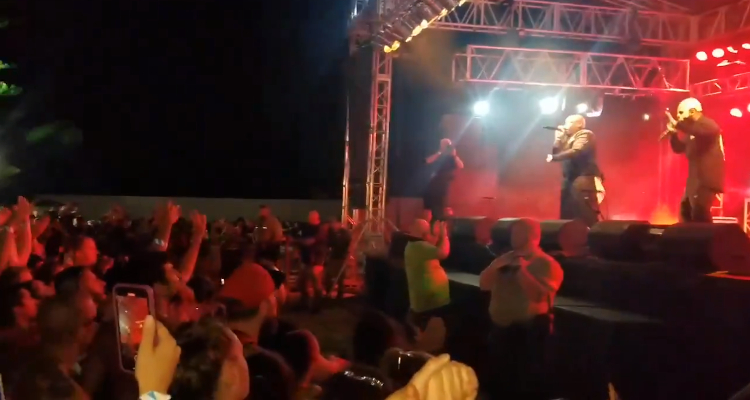 Tech N9ne performing before a crowd in the Lake of the Ozarks.

Rapper Tech N9ne is facing pushback from some social media users after playing a crowded, non-socially distanced concert in his home state of Missouri.

Tech N9ne, whose full name is Aaron Yates, delivered the largely mask-free performance at The Regalia Hotel and Conference Center in the Lake of the Ozarks, about three hours outside his native Kansas City. The gig – which also featured fellow Missourian and longtime collaborator Krizz Kaliko – took place on Saturday, August 8th. And while the approximately 1,000-attendee happening was entirely legal (Missouri was one of the first states to lift its lockdown measures, but local governments can still choose to institute restrictions), more than a few social media users are voicing their disapproval.

Like the many other non-socially distanced events we’ve reported on – from a Chainsmokers concert in the Hamptons to a packed Boosie Badazz pool party – the concert was promoted well in advance of its actual occurrence. During the roughly two weeks between the show’s reveal and its taking place, however, criticism seemed minimal.

As was the case with the Chainsmokers set and Boosie Badazz’s pool extravaganza, though, frustrated individuals began levying their complaints shortly after footage of the function started circulating on social media. Numerous clips, each displaying the audience members dancing to songs from Tech N9ne and his supporting acts, are available presently. Plus, several fans captured pictures at the event, and a number of these images have hit social media.

It bears mentioning that besides the aforementioned messages criticizing the set, which have targeted both Tech N9ne and those who attended the performance, multiple supporters are rallying behind the artist. At the time of this writing, Tech N9ne himself hadn’t addressed the controversy, but it doesn’t appear that he intends to step away from the stage anytime soon.

The rapper is scheduled to provide another show in his home state – this time from Urich – on September 12th, and his previously postponed Enterfear Tour is expected to initiate ten days before that, in Wichita, Kansas.

Some artists and fans have taken admittedly innovative steps to enjoy the live music experience in recent weeks. In addition to the Chainsmokers charity concert – which has prompted government officials to more closely monitor and scrutinize businesses in the Hamptons – New Yorkers organized an illegal rave beneath the Kosciuszko Bridge, which police shut down at about four in the morning. A “floating nightclub” faced a harsher fate, as New York police arrested the boat’s owners after receiving a tip and photographic evidence from an eagle-eyed witness.

Also over the weekend, Smash Mouth performed a non-socially distanced concert to a massive audience as part of South Dakota’s 80th annual Sturgis Motorcycle Rally. Predictably, social media criticism of the occurrence has been swift and substantial, and the controversy is currently showing few signs of wavering.