Instagram Pisses Off Users by Replacing Search – With a Reels Button 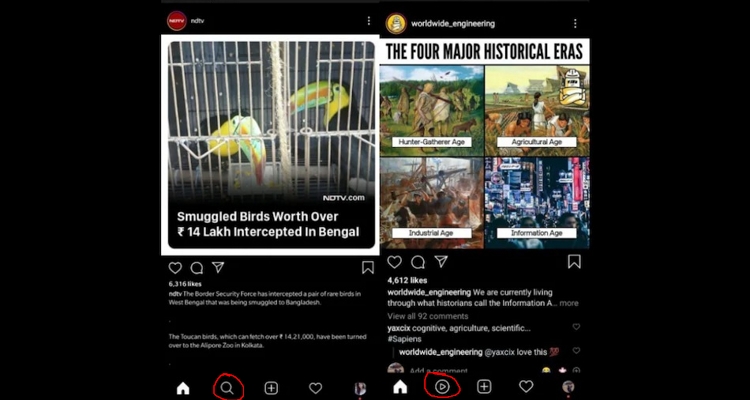 Instagram is testing a new dedicated Reels button, but it pissed off users by replacing the search button.

The Facebook-owned platform first introduced Reels in Brazil last year as a test launch. After rumblings of a TikTok ban in the United States, Facebook fast-tracked the feature to a worldwide rollout. Now Reels is completing its takeover of Instagram’s feature set by replacing the basic search function at the bottom of the screen.

Tapping the reels button will take users directly to Reels. Until now, you accessed the Reels feature through the search function. Now the function, which Instagram calls ‘Explore’ is relocated to the top right. The relocation has irritated Instagram users who dislike Reels. The change appears to be a quiet one to promote Instagram users to check out the new feature.

Reels allows Instagram users to record and edit 15-second video clips with audio. Visual effects like filters and text are available. The feature is essentially a clone of TikTok, which is facing pressure in the US. After India banned the app, the Trump administration followed suit with a 45-day ban.

ByteDance must find an American buyer for TikTok or face the service being banned in the US. Facebook hopes to attract TikTok users who are fleeing the service in fear of the ban. Making Reels more front and center on the Instagram platform is one way to do that. But it also changes the focus of Instagram, which has always been about sharing pictures.

“I don’t like Reels, and today Instagram just removed the search button from the bottom and then added the Reels button over there,” one frustrated user tweeted. “It’s annoying.”

It is pretty unintuitive to change navigation for many that has become muscle memory. But at this point, Facebook doesn’t care. Even if Microsoft manages to buy TikTok and clean up its privacy concerns, it won’t remain on top forever. Facebook and other companies are busily poaching those leaving the platform.

Services like Triller see exponential growth as users seek a new platform not owned by Facebook, Google, or Microsoft. Bill Gates recently called TikTok a “poison chalice” for anyone who buys it, and he’s not wrong.

Even if TikTok’s US operations are acquired, the child privacy issues that are surfacing could kill it. Musical.ly paid a record $5.7 million to settle its COPPA violations before it was sold and merged to form TikTok. But many of those same child privacy violations continued under the new name.