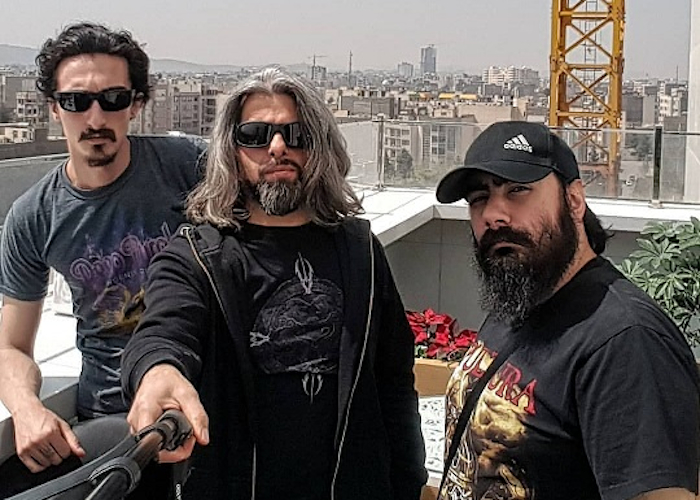 About one month after receiving a 15-year prison sentence for creating and playing heavy metal music, members of the Iranian band Arsames have fled their home country.

Arsames recently revealed that it had departed the Islamic republic to avoid serving the stunning sentence, which was handed down by a Revolutionary Court in Mashhad, Iran’s second-largest city. Revolutionary Court trials are conducted in private by a single judge, without a jury.

The three-piece band – which would have served a total of 15 years, or five years apiece – hadn’t disclosed their present location at the time of this writing. But another of Iran’s metal bands, Confess, faced similar charges, fled to Turkey, and was ultimately granted asylum in Norway.

Arsames informed fans of the ruling in a July 21st Instagram post. “No one can stop IMMORTAL IDENTITY!” – the latter being the band’s 2010 debut album – “15 NOT FAIR,” the brief message indicates, also showing a photo of the bandmembers accessing their phones and appearing to wait for a bus.

That same month, the group elaborated upon the massive sentence, recapping the situation in Farsi text and an English-language video. “Is it crime [sic] that we are playing metal music!?” the video’s on-screen text demands. “Is it crime that you think we are into satanism when we have songs about Cyrus the Great and Monotheism!?” the clip proceeds to ask.

It’s unclear what exactly prompted the Iranian court to issue such a stringent sentence to the 18-year-old band, which, to be sure, has created metal music and toured since its inception.

As alluded to in the aforementioned video, Iranian officials arrested and jailed Arsames on satanism charges in 2017. (Authorities associate metal music – and especially its symbolism – with satanism, per Arsames.)

One would expect that the bandmembers will shed additional light upon their sentence – including why they believe it arrived now, amid a global pandemic, as opposed to when they continued playing after the initial detainment – once they return to the public eye in their new nation.

Last summer, we reported that Iranian customs officials had apprehended, detained, and eventually deported English singer Joss Stone for attempting to pull off an unscheduled gig.